I’ve been a little harsh on Tom Cruise lately. Well, technically I’ve been hard on his new film, Knight and Day, for its attempts at making viral videos. However, I do have to say that the film looks fantastic, and we’re just now starting to hear reviews that match that prediction. As part of their final push, 20th Century Fox has released an interactive trailer.

The “Interactive Game Enabled Movie Trailer” allows players to gain points as they help Roy (Tom Cruise) make narrow escapes and battle a seemingly endless stream of attackers. The faster and more accurately a player completes a task, the higher their score will be. The player’s “game health” is tracked, and if their skills aren’t up to the task, the screen darkens and ultimately cracks. Players’ final scores can be shared with other intrepid “agents” via Facebook and Twitter.

Try it for yourself on IGN.com or the film’s website, and let us know what you think of it. 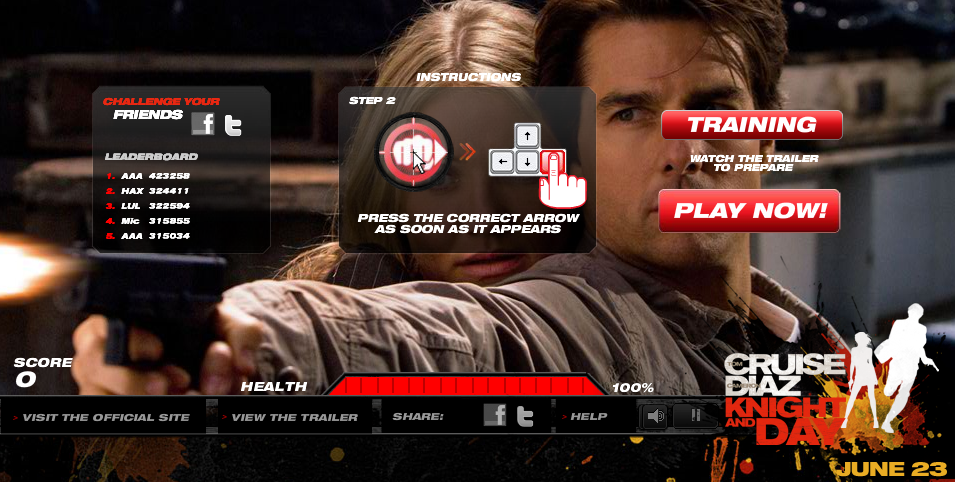 Film Synopsis: In KNIGHT AND DAY, Tom Cruise is a covert agent and Cameron Diaz is a woman caught between him and those he claims set him up. As their globetrotting adventure erupts into a maze of double-crosses, close escapes, false identities, and head-spinning romantic snafus, they come to realize that all they can count on is each other.