Paranormal Activity 2 Trailer Debuts, Pulled From Some Theaters For Being Too Scary

The first trailer for Paranormal Activity 2 debuted this week online and in front of The Twilight Saga: Eclipse, and it’s pretty scary. Unfortunately, it also gives away the ending of the first film, but it’s the scariness of the teaser that has gotten at least one theater chain to stop showing it due to complaints.

The independent horror film Paranormal Activity opened nationally in theaters last year after a big viral push. The word of mouth, Demand It! feature on Eventful, and clever advertising made its wide release possible. The $15,000 film ended up grossing almost $200 million worldwide, and Paramount is hoping to replicate that success this year with the sequel, due out just before Halloween.

Paramount has released an intense teaser trailer for Paranormal Activity 2 in an attempt to also replicate the viral buzz of the original. The teaser shows two of the last scenes of the first film, but that shouldn’t be a surprise, as the one of PA’s trailers also gave away one of those scenes. The intensity of the trailer has actually garnered some complaints from theater-goers, causing Cinemark to yank it from screenings of Eclipse, which it is attached to. That’s one surefire way to create buzz. Check out the trailer below.

You may notice what looks to be Katie Featherson’s character Katie in the new scene, implying that she survived the original film, though probably with the demon still inside her. There’s also some writing on the floor, though only in the mirror, as Slashfilm notes. The writing says “What is happening to hunter?”, which is presumably the baby, since it’s the only human in scene (outside of Katie), and his reflection doesn’t match what he’s really doing. Creepy. 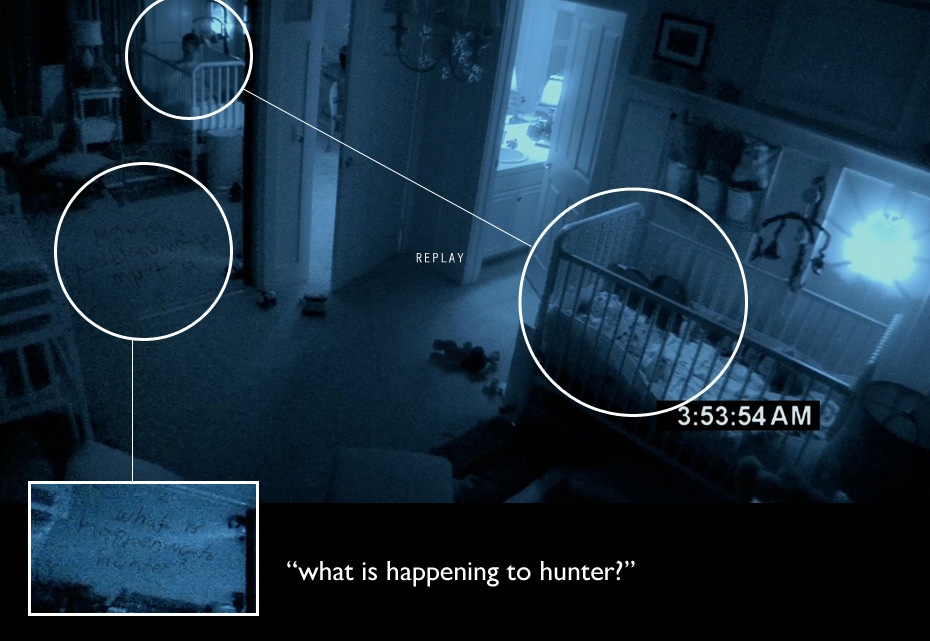 Paranormal Activity 2 opens in theaters on October 25th. It is directed by Tod ‘Kip’ Williams, written by Michael Perry, and produced by the first film’s director and writer Oren Peli.
Eclipseparanormal activityTrailerTwilight