Today we got a bunch of little news about the upcoming Tron Legacy, and since there’s not much viral news until San Diego Comic-Con (or until we figure out the postcards), let’s dive in.

First off, a few of the larger film sites got set visits to Tron Legacy in June last year. Slashfilm and Collider actually teamed up and made an in-depth video blog about the visit, which you can see below. To get more details on their visits, check out their respective sites.

Empire magazine’s new issue has two different covers for Tron Legacy, which they feature in-depth in the issue. There’s also a Comic-Con preview and a talk with directors Steven Spielberg, James Cameron, and Robert Zemeckis about the future of movies, so it’s definitely worth picking up at least one copy. 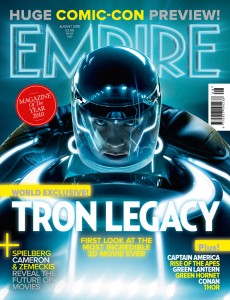 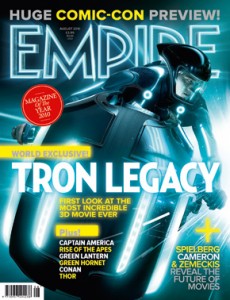 Finally, we have some news on the Tron Legacy soundtrack, which, as many know, features music exclusively from Daft Punk. The soundtrack itself is now available for pre-order (technically just an email notification) on Amazon

, and it will be released on November 23rd, almost a month before the film comes out. Also, there has been some speculation that Daft Punk would perform at least some of the soundtrack live at Comic-Con, but Peter at Slashfilm has confirmed that will NOT happen. Too bad, since that would have been fun to watch.

Tron Legacy opens December 17th in theaters and 3D IMAX. Follow all of our coverage of the film and its viral campaign through our Tron Legacy Viral Page.
Comic-ConDaft PunkSoundtrackTron Legacy