The Buzz: Edward Norton Not in The Avengers, Next Bond Movie On Hold But Not Dead, X-Men: First Class Casting Bonanza, And More!

The latest buzz-worthy news is that it looks like Edward Norton will not be reprising his role as Bruce Banner (aka The Incredible Hulk) for The Avengers. Drew McWeeny at Hitfix claims that Marvel sources have confirmed this, and it looks like Norton wasn’t even give a choice. Marvel chose to save money by casting an unknown (yet to be named), even though Norton has said in the past that he would like to return. The cast of The Avengers is supposed to be at Comic-Con this year, so we should know at least by then who the new Hulk is.

The Internets were aflutter this week as it looked like the James Bond franchise might be the latest victim of MGM’s financial meltdown. AICN reported that the latest Bond film, to be directed by Sam Mendes and star Daniel Craig again, was dead. However, Deadline reported later that while development IS on hold, it’s just until MGM is viable again, though who knows when that is. Either way, it looks like Craig and Mendes are willing to wait.

X-Men: First Class saw a flurry of casting news this week. As FusedFilm reports, Nicholas Hoult (About A Boy) has been cast as Beast, Kick-Ass’s Aaron Johnson might by Cyclops, and Caleb Landry Jones is going to be Banshee. Lucas Till might play little brother to Johnson since he is cast as Havok. Also, Kevin Bacon is in negotiations to play an unknown villian.

Producer Gore Verbinksi confirmed to IGN that the big budget film adaptation of the hit video game BioShock is still going forward despite Prince of Persia‘s lukewarm theatrical gross. The Juan Carlos Fresnadillo-directed sci-fi tale has been stalled recently due to its large budget, especially since Verbinski wants to make it rated R to please the fans and keep it from being watered down.

There’s been some interesting money news this week concerning the Twilight and Harry Potter series, Spider-Man, and Avatar. While Andrew Garfield is only getting half a million dollars for his role as Peter Parker, the Twilight stars are earning at least $25 million a piece for each of the Breaking Dawn films. Deadline sheds a light on Hollywood’s shady bookkeeping with their report on Warner Brothers’ net profit statement for 2007’s Harry Potter and The Order of the Phoenix that shows it LOST over $167 million despite grossing almost a billion dollars worldwide. On a brighter note, director James Cameron made a whopping $350 million for Avatar. 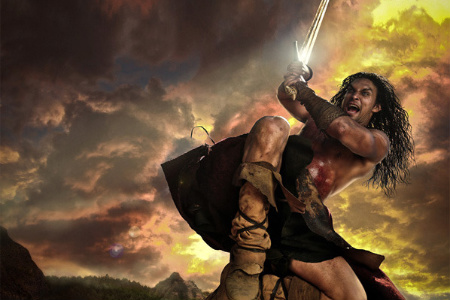 Get an Intense Look At Jason Momoa in Bad-Ass New Conan Images! (Above)

Chris Nolan: “I’d Love To Do A Bond Film”