The first novel, “Heat Wave”, whose real-world author is not disclosed, began the character of Nikki Heat, who was a more sexualized version of Beckett. Castle was working on the book the entire season, finally finishing by the finale. The real novel was released after the first season ended and made it to the New York Times bestseller list. The plot vaguely followed the premise of the first season, and during the second season, snippets of the book were mentioned that fit with the real book (i.e. page numbers). 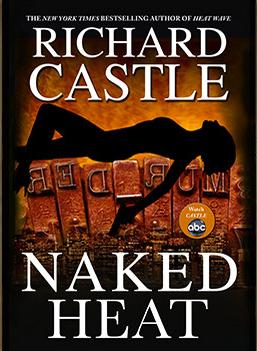 In Season 2, Castle is working on his second novel of the series, “Naked Heat”. Now this book will also be released in the real world, coming out September 28th, just one week after the third season premiere. ABC made the first half of “Heat Wave” available for free download last year, and so far they have made the first chapter of “Naked Heat” available at ABC.com. As a fan of the series and the first novel, I hope they continue the trend and keep tying in the real books with the show. “Naked Heat” is available for pre-order now