More postcards were sent out this week for the Tron Legacy viral campaign, and it looks those coded strips actually DO mean something. Thanks to the work of Unfiction members, we now have a new website in the campaign, which features another simple (yet difficult!) flash game from our friends at Encom International. Details below.

As we reported at the top of the month, postcards were sent out to Flynn Lives members that advertised games, but of course, not all is as it seems. A black strip on the cards revealed dots when hit with UV light. Quickly it was theorized that overlaying the different strips would reveal something, and low and behold the theorizers were correct, as you can see below in this computerized composite from FilmEdge.

The letters revealed show “ENCOMGAMESDOTJP”, which of course leads us to the new website EncomGames.jp. The site seems to just be the Japanese homepage for Encom International, with very little English text. Based on the rough Google translation of all the sections, the Japanese text is real but doesn’t reveal much, just adding to the professional look of the site. The real gem in all of this is the playable game “Circuit Cycles”, found here. 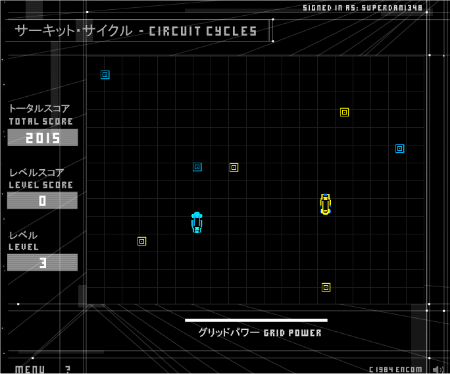 As you progress in the Tron-like game you get badges, and the final badge reveals a subpage to the Flynn Lives website, FlynnLives.com/identityraid. This page is simply a countdown that ends on Thursday July 22nd at 11:30am. This just happens to be right in the middle of the Tron Legacy panel at San Diego Comic-Con. Coincidence? I think not. Based on the postcards advertising that Encom’s games are now playing “at your local arcade”, I’d say there is a good chance 42 Entertainment again features a real Flynn’s Arcade at Comic-Con, similar to what they did last year. Hopefully it will be more than that though, as this is the final push for the film’s December release.

For more information and to stay up to date with Tron Legacy and its viral campaign, check out our Tron Legacy Viral Page. We’ll be covering Comic-Con live, with Tron Legacy being our focus, so we’ll definitely get you the scoop from San Diego, including video, pictures, and maybe even some interviews.

Update: The sticker on the new postcards confirms that Flynn’s Arcade will yet again be at Comic-Con. 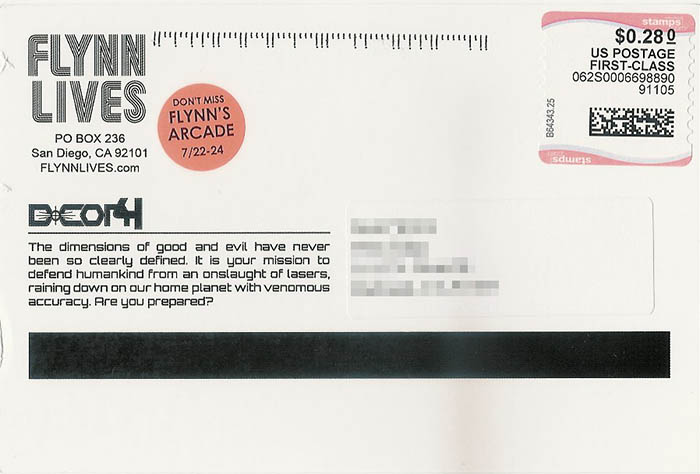