So far the Super 8 viral campaign has been all about the details. For instance, if you were one of the smart ones who took the newspaper page seriously, then you were rewarded today with a gift. What am I talking about? Find out after the break.

Back in May, we told you about the two newspaper pages that were found once the countdown ended on Scariest Thing I Ever Saw. On that page was ad for Rocket Poppeteers, which led us to the temporarily down homepage for the fictional kids treat. The ad featured a free coupon to become a Rocket Poppeter (club member), and while people like me just pulled information from the address and such, much smarter people actually filled it out and mailed it in.

The reason these people, like some of the members on Unfiction, are smart, is because the folks at Rocket Poppeteers have replied back. So far, no clues have been found, but they are working in overdrive at Unfiction to pull any info they can, so we’ll be sure to follow their progress and update you as necessary. In the meantime, read the text of the letter below along with photocopies of both the letter and the envelope, courtesy of Super 8 News (click for high res). Don’t forget to follow our coverage on our Super 8 Viral Page.

Rocket Poppeteers is looking for the best and brightest to help Captain “Coop” Cooper with his biggest space adventure ever!!! 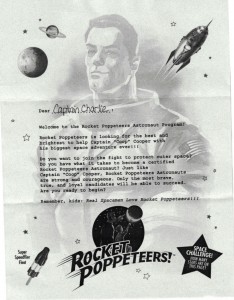 Thanks to Film Edge for the heads up.