Yesterday was the start of San Diego Comic-Con 2010, and what a day it was. Last night was “Preview Night”, which had all the booths open for us to look at, experience, and take swag. Watch my video compilation of the night after the break, along with some of my thoughts on my first trip to Comic-Con.

As you can tell from above, the convention floor was packed even though the space was huge. The place is front-loaded with movie booths, and the comic book section at the back is large, but mostly deserted. While I did pick up some swag to give away (some posters, one t-shirt, and a few other knick knacks), the lines for the good stuff were crazy long, and lot of the stuff was gone early. Fortunately, there are other cool things to do, like lift a car: 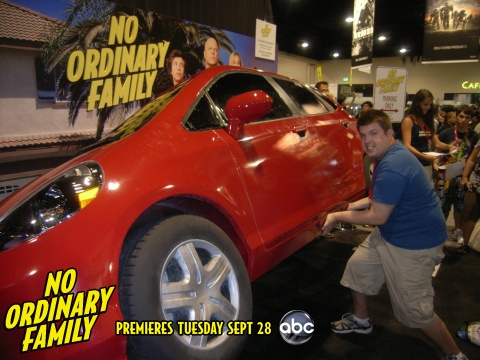 The Thor throne room was pretty impressive, though I missed his hammer, and Tron Legacy booth was my favorite. The Lionsgate booth was fun, as they gave out press-on tattoos for The Expendables and let you get buried alive for Buried. See me buried alive here. My other favorite moments included seeing the awesome things up close, like the Iron Man suits and the District 9 guns. I also got to see part of the filming crew for Comic-Con Episode Four: A Fan’s Hope.

If you were at Preview Night, what was your favorite part? We’ll be continuing our coverage of Comic-Con throughout the week, so make sure you follow us on Twitter for the fastest updates, and our Comic-Con section for more in-depth coverage.

P.S. I finally got to meet Kevin Coll from our partner site FusedFilm in person. The guy’s a cool dude, and we’ll be collaborating more during the convention.
AvatarComic-ConDistrict 9LionsgateNo Ordinary FamilyThe ExpendablesTron Legacy