As part of our coverage for San Diego Comic-Con 2010, I attended the “Aloha Earth!” panel for CBS’s upcoming Hawaii Five-0 remake. On this morning’s panel were stars Daniel Dae Kim (LOST) and Grace Park (Battlestar Galactica), along with executive producers Alex Kurtzman, Robert Orci, and Peter Lenkov. After the break, find out what juicy stuff we learned.

Dalton Ross of Entertaintment Weekly was the moderator, and we started off seeing several clips from the show that introduced the characters. It looks well-produced, but I worry that it tries to use the flashiness of the action and humor to cover up a superficial product (see Kurtzman and Orci’s Transformers films and you’ll notice it’s a trend of theirs). However, the show does look authentic to the area, as it is shot on location in Hawaii, and they are going to deal with island politics and such.

Similar to Burn Notice and other procedurals, the show is accessible to both casual viewers and those looking for a larger arc. They all know there’s a lot of expectation that comes with doing a remake of a show people love, so they hope to keep the essence of the original without mimicking and being predicable. A great example of that is how Kono is now played by the beautiful Park, when in the original, the character was a large man. Lenkov says the new series is almost like a valentine to the original, which is proven perfectly by the fact they actually re-recorded the original theme for the show with the original musicians, and didn’t change it at all. 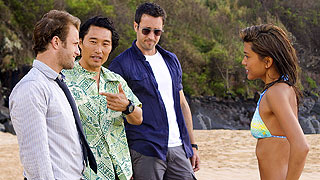 Park and Kim both talked about their respective previous shows that have also gotten a lot of attention from the Comic-Con audience. Kim was satisfied with the finale of LOST, as he wanted everyone to gain peace and closure. His favorite episode to shoot was the season one finale. He was very grateful to find a good project that let him stay in Hawaii, since he had made a home there with his family. Park talked about how she’s yet again played a character in a remake that was originally male. She had a hard time adjusting from being on a spaceship to doing regular roles. When talking about their famous roles, they joked that they had spoiled the series for each other.

Finally, here’s a few other random notes about the show that were brought up. The pilot took a grueling 16 days to shoot. Dano was the hardest character to cast, though Kurtzman and Orci thought it would be the easiest. The duo is able to do so much because they were brought up professionally in the TV industry and surround themselves with a great crew. Kim brought up the interesting point that this show is rare in featuring two asians in starring roles, especially when there’s only four starring roles. The producers are hoping to get cameos from some of the original cast members. The network has been really supportive of the show, and they actually are planning on putting a Hawaii Five-0 ad on every bus in New York City (dates unknown).

For more news on panels, screenings, and other cool Comic-Con stuff, stay right here. You can follow us on Twitter for the fastest updates, and get in-depth coverage here.
CBSComic-ConHawaii Five-0