Wow, yesterday really was Comic-TRON here in San Diego, and I’ve got the video to prove it. After a great Disney panel that featured 90% Tron Legacy, the scavenger hunt began to get access to Flynn’s Arcade. I was fortunate enough to get in, and it was amazing. The fun doesn’t stop there, as the viral continues. Get all the details after the break.

The Tron press conference and panel started off the day with a bang, as we got shown an extended clip and the new trailer at the panel. I was really impressed with the tech used to make Jeff Bridges look younger. Below are the official videos for both events.


After the panel, the Operation Tron Twitter account tweeted out directions on how to get a special packet. This packet gave you two wristbands for entry into Flynn’s Arcade special opening last night, as well as a glow-in-the-dark disk that had a 2GB flash drive in it. So far it looks like the drive only has the new trailer loaded on it, so we’ll move on. There were only enough badges for a few hundred people, so it was relatively exclusive. When we finally got inside, we were treated to experience like no other. Here’s the video of the event.

As you can tell, we first walk into Flynn’s Arcade, which looks just like it did in the first trailer. We are given a plastic casing that has seven tokens with all seven featured Encom games. Then the wall behind the Tron game opens, we go down a hall into the office (again, just like the trailer). We then get de-rezed (sent to Tron world), after which we walk into a Tron-themed space called End of Line Club, which plays music mostly from Daft Punk. The coasters you see have a lot of information on them, which is the next step in the viral. 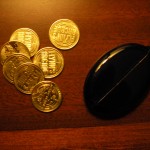 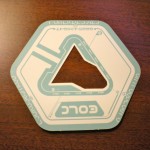 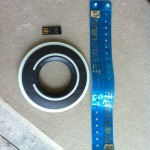 As you can also see in the video, there were logos throughout the room that matched the coasters. The coasters and the logos had a sequence of words and numbers that were cut in half written on three edges (double-sided for the coasters). Once you matched them up correctly, you could see the 6 codes. Thanks to the work of the ARG community, as well as recalling previous experience, we find out the codes are for HelloFlynn.com, giving us more files from Flynn’s server. Click on the codes below to see what they reveal.

The focus now seems to be on family. Along with a photo of Sam Flynn and his mom, we see some writings from Kevin Flynn that seem to show he was working on something very big. Sam’s mother died, and Flynn was trying to find a way to either bring her back or go to her, which may be why he got himself stuck in the Tron world. One of the two sketches of Tron show the room recreated for the party we attended.

The coaster also has a phone number, 1-888-542-0847, which is the phone number is End of Line Club. You are greeted with “Hello, Program”. So, that’s it so far for Tron Legacy and its viral campaign. We’ll bring you coverage of the press event later this morning, and if there are any other developments (which rumors support), we’ll bring them to you.