Comic-Con: Let Me In Panel

Overture brings its latest chiller Let Me In to Comic-Con with a panel that included writer/director Matt Reeves with cast members Chloe Moretz (Kick-Ass), Kodi Smit-McPhee (The Road), and Richard Jenkins (The Visitor). We got to see some footage and learn more about how this horror remake came to be. Get the details after the break.

Let Me In tells the story of a bullied boy who meets a new girl that movies in next door with a fatherly figure. He finds out she’s actually a centuries old vampire, but the two bond and she helps him with his bullies. The father figure goes out to find blood for the girl by killing victims and draining their blood.

Matt Reeves was offered Let Me In by Overture back in January of 2008, right after Cloverfield came out. He was uncertain about doing a remake and even called up the director of the original film, Let the Right One In, Tomas Alfredson. Reeves thinks Alfredson’s movie is a masterpiece. Reeves was drawn to the idea of turning a vampire movie in to an exploration of the struggles of adolescence. It was important he get good child actors for the two main characters, otherwise he wasn’t going to do it. 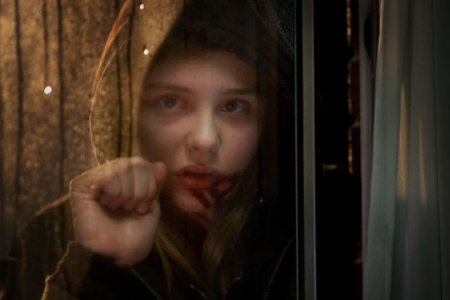 Reeves also liked the fact that the film would be about how it’s not easy being a vampire. The relationships are so important to the story, and this is why I think Reeves is perfect for this film. The film is set in Los Alamos, NM during the early 80s. Reeves chose the time frame partly because that’s the setting of the book Let the Right One In and Alfredson’s film. Also, the 80s are so distinctive and big part of his childhood that it made it easier to set it there. He originally wanted to set the film in Colorado, but ultimately chose Cloverfield writer Drew Goddard’s home town. This was important because he really wanted to show the stark color contrast of blood on snow.

The two clips we saw were impressive. The first had Owen and Abby at a mini mart, where Abby tries to eat a Now or Later, but has to throw it up outside. The next scene had Jenkins’ character fail in his attempt at getting another victim, so he pours acid on his head to distort his face. This was a pretty intense sequence.

The gender ambiguity of the vampire’s gender came up in the Q&A, as the book had the vampire be an androgynous boy, while the original film only suggested it in one scene, though a female played the role. Reeves implied that he stayed away from the whole issue in his film, thinking it might be distracting.


For more news on panels, screenings, and other cool Comic-Con stuff, we have you covered. You can follow us on Twitter for the fastest updates, and get in-depth coverage here.
Comic-ConLet Me InMatt Reeves