This was a big Comic-Con for us at MovieViral, as this was the first time we’ve provided live coverage of the event. We’re sure to have even more great coverage next year and beyond, but until then, let’s look back at Comic-Con 2010.

This was personally my first Comic-Con as well, and I’d only been to San Diego a handful of times. You can tell from how everything is set up and how people talk about it that San Diego deserves to be the convention’s home. I’m not much of a picture-taking person (see the few I took here), so taking video was even more complex for me. Fortunately, I did a decent job of covering two of my first experiences of the Con. Preview Night allows press and four day ticket holders to get an advanced look at the convention floor on Wednesday. The Gas Lamp district, just across the street from the San Diego Convention Center, is home to all the off-site festivities, and it was jam-packed with events from the Machete party, the Cartoon Network pizzeria, and of course Flynn’s Arcade.

While the convention floor was really packed all week, there were definitely some great booths. The Tron Legacy and Marvel booths looked the coolest, while Lionsgate had the one of the most interactive booths. I even got to be buried alive thanks to the new Ryan Reynolds film Buried.

Despite the incredibly poor Wi-Fi and 3G coverage at the convention center, we did manage to Live Blog a few of the panels. The rest we just did recap articles, so see our overall coverage to find those. We also got to cover and take video of a few press conferences, including those for The Other Guys, The Green Hornet, and MythBusters. Next year we might even get some one-on-one interviews, be on the lookout for that.

As to be expected, the highlight of the event for us was Tron Legacy. Along with their official panel, the film’s viral campaign had a large presence. Flynn’s Arcade had an exclusive opening on Thursday, and you can watch what it was like to be the first to see it in the video below.

The viral for Super 8 surprisingly showed up at the con via its Rocket Poppeteeters ice cream truck. J.J. Abrams also briefly talked about the film during his panel. There were more viral elements for other films through-out the convention and surrounding areas, but we just didn’t have the manpower to follow through with them all. Next year we’ll have more staff, so we’ll track down all the smaller ARGs as well. 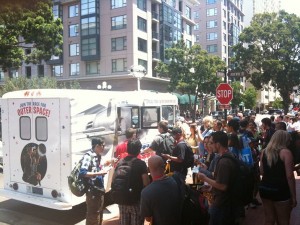 I was truly amazed at how crowded Comic-Con was overall. The lines for everything seemed longer than Disneyland, and some people even camped out the night before just to get decent seats to a panel (like one of our readers Josh, who deserves a lot of credit for helping me throughout the week). Interestingly, while the lines were one of the worst parts of the Con, they were also one of the best. It seemed no matter what line I was in, I was able to strike up a conversation with a fellow nerd and completely geek out. My two favorite moments overall had to be the Flynn’s Arcade opening (where I also got autographs from Tron Legacy director Joseph Kosinski and actor Bruce Boxleitner), and Chuck star Zachary Levi asking for my business card.

To hear more about Comic-Con and my favorite moments, be sure to listen to our latest podcast. For our complete coverage of the event, click here. We’ll also be giving away some great prizes from Comic-Con 2010 in August, so be sure to follow us on Twitter to stay in the loop. Next year we’ll bring you even more great coverage of this massive event, so stay tuned throughout the next year as we provide updates of Comic-Con 2011.