Dexter again with the ad campaigns! I won’t call it a killer ad campaign because a pun is exactly what you would expect here.

Yes! You can, in fact, read. Showtime in cooperation with America’s favorite serial killer has launched a full-fledged ARG in anticipation of its fifth season, due to begin on Sunday the 26th of September.

Considering Dexter has always had a way of bringing down the house at Comic-Con (and a history of unconventional and controversial ad campaigns), I guess an ARG was probably the next logical step. Take a look at some details below.


At first it looked like they were only planning on doing their heavily-promoted “Dexter: Game On” ballyhoo at Comic-Con (the URL for which was found on the sides of buses and on every attendee’s lanyard). It was essentially just a scavenger hunt in and around the convention center, played via the SCVNGR app for iPhone and Android. Basically it had you running around and checking into various locations with the hopes that you would eventually win prizes, and contribute “kills” to the Game On website’s total tally (which would, when it reached 100,000, unlock some new Dexter footage). Wow, talk about your run-on sentences. If you couldn’t play at the Con, you could play at home by uploading a photo of yourself to the website and adding Dexter’s signature cheek slash to your beautiful mug. 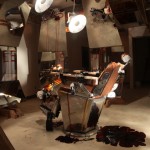 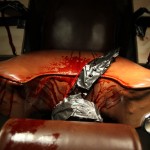 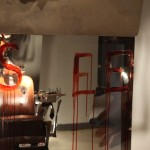 Still, playing at the Con was pretty rewarding. I mean that physically. If you earned enough points, then you stood to win prizes like the Dexter season 4 DVD. Not only that, but on the second day, the SCVNGR app lured you to the “Kill Room,” an off-site location with a beautifully-staged, somewhat demented crime scene (click the thumbnails above for a larger view). This turned out, rather than being a simple three-day gimmick, to be the game’s rabbit hole, immediately splitting it into two separate but equal parts.

On the lawful side of things, the official story is that the “Serial Huntress,” an ex-FBI agent experimenting with a new method of catching serial killers (“crowdsourcing”), has opened the crime scene for you, the civilian, to observe. You are directed to her website, SerialHuntress.com, and her tipline, (877) 67-ENDIT, if you find anything that might be a clue in solving any aspect of this grisly murder. 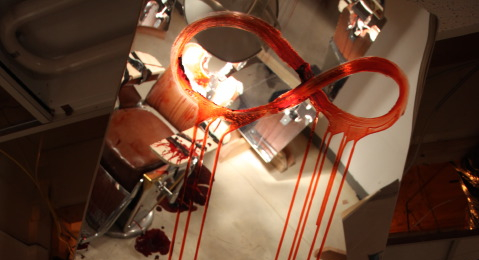 On the darker side, the killer has left you, amidst a complex crime scene, a series of clues that would lead you directly to him. Dubbed the “Infinity Killer” by the Serial Huntress, this relatively young serial killer put on quite a show. In the center of the room, a dentist chair covered in blood; surrounding it, a series of eight mirrors with letters written on them in the same blood and above them the killer’s signature, the “infinity” sign (hence the name, I guess). When unscrambled, the letters on the mirror spell out “Sleep Superbly,” leading you to another website: SleepSuperbly.com, a “dream therapy” website, which includes a testimonial from none other than the much-beloved LFI on the BHB case, Vince Masuka. If you check out the “Premium Access” tab, you will be automatically logged in as user “F8.”

Here, you can check out his “dream therapy sessions,” video in which he chats about his somnambulant experiences with the website’s mildly creepy automated robot thing, Iris. If the contents of his reported “dream” weren’t enough to convince you that this guy is the Infinity Killer himself, following his trail of clues (mostly, a reflection in his sunglasses–which I point out he is wearing inside a dark room–that reveals a Twitter account, @urnameurlife) eventually gets the guy to send you actual audio of the murder, which sounds like it was pretty painful.

Each Tuesday, the Serial Huntress posts a video briefing on her website, generally revealing new information about one of the Infinity Killer’s previous three victims. Each Friday, F8 posts a new dream therapy session on Sleep Superbly, which always contains a hidden trail to a Twitter account, thematically linked to each of his victims.

So far, the players’ list of possible suspects includes Dominic Cobb, Willy Loman, and Count Olaf, so I encourage you to check out some of these websites and chip in on the Serial Huntress forum with some useful tips and suggestions that might get us somewhere, although I’ve still got my money on Cobb.

For the Dexter connoisseur, this game offers a thrilling opportunity to play on both sides of the table, as the sometimes-hypocritical detective who’s secretly rooting for the killer.

And for the particularly curious, I’ve been summarizing the ARG, in full, on this page on my website, because I’m a huge nerd. It’s no short read but it’s pretty comprehensive.

Or, you can just jump in.

Week 2: Miami victim, Santos Jimenez (yeah, I bet that name rings a bell if you watch Dexter) — Victim A, 2008