Every so often, Google likes to change their homepage logo to illustrate something timely. Often called a “Google Doodle”, it is usually done to commemorate a significant anniversary or holiday, and given how big Google is, it tends to get people talking. Often we find a way to tie in movies to the subject (see our Pi Day article for a great example of that). Fortunately, we don’t have to stretch the concept at all today, as Google celebrates the 71st anniversary of The Wizard of Oz.

MGM’s The Wizard of Oz was released nationally on August 25th, 1939, but it had its first premiere screening, in Wisconsin of all places, on August 12th. The film went on to become an American classic, becoming notable for its great sets and costumes, memorable songs, and mixture of sepia tones and bright Technicolor (still relatively new at the time). The story tells of farm girl Dorothy, who is unhappy in drab Kansas and dreams of bigger things. After she knocks her head in a severe tornado, she wakes up to the colorful fantasy world of Oz. On the way to see the Wizard to go back home, she meets a few interesting friends and enemies, and realizes that she misses her “drab” farm and family. The film is based of the L. Frank Baum novel The Wonderful Wizard of Oz, but like with most films, considerable changes were made.

Oz won an Oscar for Best Musical Score and Best Song (“Over The Rainbow”) at the 1940 Academy Awards. It was also nominated for Best Picture, and has received many other awards and nominations. AFI has included the film on many of its Top lists, naming it the best fantasy film of all time in 2008, the 3rd best musical in 2006, and the 6th best film overall in 1998. “Over The Rainbow” was honored as the #1 film song in 2004. 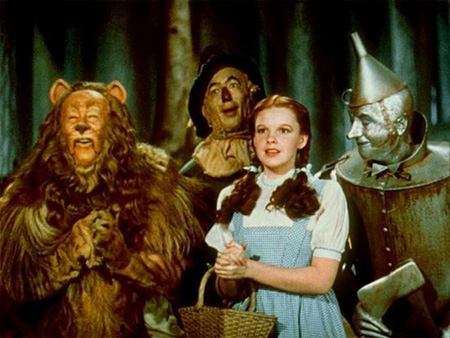 The growing popularity of the film over the decades has resulted in many remakes, sequels, and spin-offs. My favorite is The Wiz, Motown’s 1978 urban take on the story starring Diana Ross and Michael Jackson. Probably the most trending take on Oz at the moment is the musical stage play Wicked, which tells the story from the point of view of the Wicked Witch of the West. There are two projects in the works right now based on the film, one being directed by Sam Raimi, and another possibly being directed by Drew Barrymore.

What do you think of The Wizard of Oz? I see it as the precursor to Inception. Think about it. Dorothy only gets the idea to appreciate her home and family after being in the dream-like world, which happens to be populated with characters that look like the people she knows. We are left wondering at the end whether Oz is real or not, but either way the inception worked.