We’ve been keeping tabs on talk that some of the Tron Legacy standees in movie theaters have QR codes alongside them. Now we have proof of at least one in Ohio, which leads to a cross-promotional website for that particular movie theater. It in, it says that Encom is sponsoring the theater, and the fictional game company is releasing Tron Legacy as a movie version of their game. There doesn’t seem to be more to it than that, but we’ll update if necessary. Read the official press release after the break.

Monday, August 2nd, 2010
Encom International is pleased to announce its venture into the world of feature films with Tron Legacy, the motion picture adaptation of the hit arcade game Tron.
As with our videogames, Tron Legacy will feature state-of-the-art technology to help bring the world of Tron alive for viewers. The film is expected to release this December.
In addition to the release of Tron Legacy, Encom has also partnered with the Marcus Crosswoods Cinema to help promote the feature.

“We are pleased to have the opportunity to work with The Crosswoods,” said Alan Bradley, Executive Consultant for Encom. “We have always strived to create products with unparalleled entertainment value, our expedition onto the silver screen will be no different. We will work closely with The Crosswoods in the upcoming months to create an event that will be more than just a movie premiere.”
Bradley expects the movie won’t disappoint fans of the classic arcade game. “I am confident that we have created an exciting movie that will exceed the expectations of the viewer.”

Encom have been on the forefront of innovation in technology for decades. In the heyday of arcades, Encom was king of the coin-op with their first breakout game Space Paranoids. Encom went on to have success with ArcWars, Kraz-Bot!, Astro Gunner, and the staple of the company, Tron. For more information, visit Encom’s website at www.encominternational.com 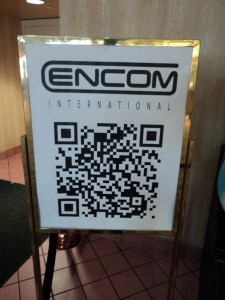 Photos courtesy of OEsuperman on Unfiction, who was the first to report on it.