The Weirton Daily Times (via Unfiction) has an interesting article about upcoming casting for the unnamed Paramount film being shot in the small town. Of course, we all know that any mention of a Paramount production in the West Virginia steel town (including one with the codename “Darlings“) is for J.J. Abrams and Steven Spielberg-produced Super 8. The Daily Times article discusses the film’s prep and search for extras.

Crew from the production talked to students at Weir Middle School about what it takes to shoot a major motion picture. The personnel included Sonya ‘Sonny’ Tormoen, who is presumably the casting director given her resume, location manager Demian Resnick, art director Domenic Silvestri (who worked on one episode of LOST), and production supervisor Montez Monroe.

If you needed more evidence that this mystery production is for Super 8, there are several connections to Abrams and Spielberg. Resnick and Monroe both worked on the upcoming Morning Glory, which Abrams produced, and Resnick also worked on Cloverfield. Silvestri worked on an episode of LOST as well as the Spielberg-produced Eagle Eye. 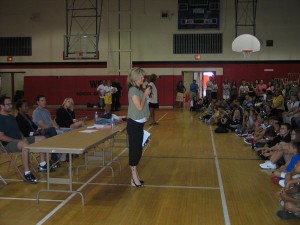 At the end of the presentation, the crew passed out information on casting calls for local extras. They are looking for up to 2,000 extras, none of which will have speaking roles. The casting calls are set for September 3rd.

For more information on the casting call and what the production people talked about, check out the Weirton Daily Times.
Super 8WeirtonWest Virginia