‘The Virginity Hit’ Billboards Cause Controversy

A few weeks ago, we told you about the toll free number used to promote the Will Ferrell produced comedy The Virginity Hit. Now the number is being advertised through billboards, and it is causing quite a stir. Get the details after the break.

The billboards, which have been found in major cities around the country, ask “Still A Virgin? For Help, Call 888-742-4335”. Of course, this is going to get politicians, Christians, and parents upset without even caring what the signs are really for, so many have demanded the billboards’ removal. As we always say, this is one of the downsides of viral marketing. Many people mistake it for being real (Sony’s 2012) or something its not (Adult Swim’s Boston fiasco). According to Deadline, the phone number has been called 70,000 times in five days.

What do you think? Is the billboard inappropiate, even as a film advertisement? The Sony Pictures film, about three teenagers who go on an adventure to help their virgin friend pop his cherry, opens in theaters on September 10th. 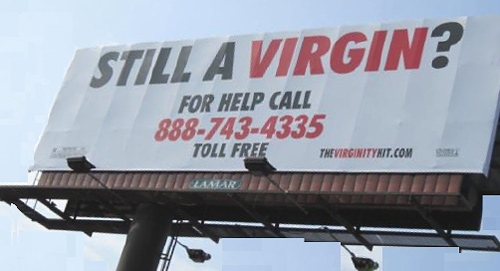