Let’s get your first question out of the way. Yes, there will be a Piranha 3D sequel (Piranha 3D2?). Sure, the horror comedy has only made $20 million going into its third weekend in theaters, but that’s almost the film’s production cost, so the Weinstein Company must see potential for more of the same in a second flick. If that wasn’t enough, fans of the film will get to choose who gets killed in the sequel.

Piranha 3D is one of those films like Crank or Shoot Em Up that just takes its genre and pushes it to the limit. The film, about prehistoric piranhas released after an underwater tremor, is full of fun gore, nudity, and exploitative 3D, all in one package. The viral marketing has been just the same, which is why this latest plan shouldn’t be too surprising. 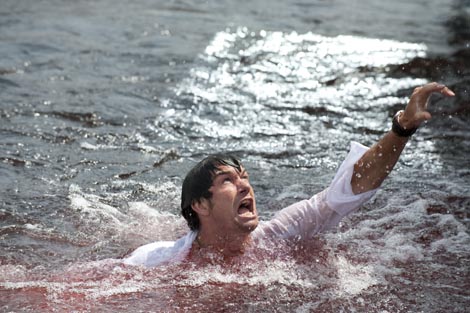 Entertainment Weekly is reporting that the Weinstein Co. is planning on doing a contest where the audience will get to choose which celebrity they would most like to see be “chomped, sliced, impaled, crushed, and/or skeletonized in the new movie”. The first film had a surprisingly strong crew of actors, and seeing at least one of them die (no spoilers here!) is what inspired this fan poll.

There are no details yet, but the studio is planning on announcing something soon, as well as make a website for it. It’s unclear whether fans will choose from confirmed cast or just popular celebrities. Once it’s announced we’ll give you the scoop.

What celebrity would YOU like to see chomped in the Piranha 3D sequel?
ContestsPiranha 3D