Del Toro Offers Opinion on Future of Storytelling and Transmedia

When Guillermo Del Toro speaks, people listen. It is probably because the director has solidified himself as a visionary of sorts in modern cinema. His movies, like Pan’s Labyrinth and Hellboy, offer unique takes on traditional genres. I was one of many who cheered when Del Toro was tapped to direct The Hobbit, and was subsequently disappointed when he left the project earlier this summer. Still, the man has no shortage of work, as evidenced by Collider.com’s interview with him at the Toronto International Film Festival this past weekend. There, the director had some interesting thoughts on the future expectations of storytellers like himself. Hit the jump for more.

Techland found a pertinent quote in the Del Toro interview where the director opened up about his desire to do more than direct film. As he explained, it will soon become necessary for creators like him to be versed in all forms of media expression:

I’m not sure who these detractors of transmedia are that Del Toro speaks of, but this website certainly wouldn’t be around if the phenomenon wasn’t real. The question  in the coming years is to what extent does transmedia play in storytelling? Will it give creators on a mass scale more freedom to tell their stories? Could our culture be heralding in a age of deeper, original works because they can be told using a wealth of different media? 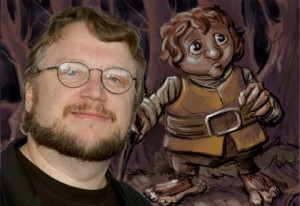 Furthermore, if his foray into television pans out, Del Toro would join an impressive list of successful film writers and directors who have or hope to establish a place on the tube. J.J. Abrams (he pretty much owns TV), Steven Spielberg (next fall’s Terra Nova), Martin Scorsese (this fall’s Boardwalk Empire), and potentially, and Jonah Nolan (in collaboration with Abrams) all seemingly have ambition for the small screen.  Is this just a phase, or is Del Toro’s prediction already showing signs of fruition?

I think of Joss Whedon as one who has taken multiple properties and successfully presented them across different mediums. Ratings and box office figures aside, Firefly is a beloved television show, film, and comic book series, largely because Whedon can direct, write scripts, and write comics. Del Toro strikes me as a man of similar talents. I felt directing The Hobbit would catapult him into American consciousness, and give him a seat next to Peter Jackson, James Cameron, other directors in Hollywood who are singled for their creativity and forward thinking. Although a trip to Middle Earth no longer appears on his radar, Del Toro still clearly has big plans.

I think there are some interesting ideas to be considered, both from Del Toro’s comments and the larger issues in general. If you have thoughts, feel free to include them below.
Guillermo Del ToroTransmediaViral Analysis