Monsters Review: Where Are The Monsters?

Monsters, written and directed by Gareth Edwards, is a film that has a lot of hype to live up for. Many have claimed that it is the most original film of the year and that it has rising suspense supported by impressive special effects from such a low budget. Are they right, or is the buzz misleading? Find out in the review after the jump.

One thing that might bug you about Monsters is the lack of real sci-fi or any involvement of Monsters at all. The movie will, as expected, center around the two characters Sam Wynden (Whitney Able) and Andrew Kaulder (Scott McNairy). Most of the story is about the interaction and chemistry between these two people while the monsters are just a nuisance and/or plot devices to make things exciting as they travel from Mexico to the States. About 80% of the time the monsters are just there to make some noise or break some things.

The opening scene and titles will give you enough back story to understand everything that will happen throughout the movie. That’s a good thing, because you’ll focus more on the couple more than anything else, or at least you should. Just like every other romance story, these strangers will have chemistry that will shape and form in the harsh conditions of Mexico. This is an adventure that spans less than a week, so there is plenty of time for a relationship to grow. The sad part is that it’s not much. I can’t say more without spoiling it.

They’re both attractive, but their conflicts and rewards never get grotesque.

If there is one thing this movie excels at, it’s realism. Not one character in the movie overacts. Yes, most of the people (besides Sam and Andrew) aren’t actors at all, but they don’t seem forced or obviously being told what to say. They look and feel like people you know, and the gritty adventure through the dirty jungles of Mexico don’t look fake. Everything in this movie is well structured and believable, except the monsters themselves.

Yes, it is unfortunately not a surprise that most of the time the monsters are obviously fake CGI models in the surrounding area. However, some moments will take you by surprise and will, at least briefly, make you believe they’re really there. The biological design of the monsters may look like a bunch of severed Chtulhu heads moving around smoothly, but they still are seen from many different viewpoints. Sometimes they’re frightening, other times they’re cute, and to some people, quite laughable. The reason why they’re being exterminated is explained during the forest scene, which is actually about an hour in and when the action actually begins to take place. The rest of the movie is just an hour long teaser if you don’t give a damn about the couple. 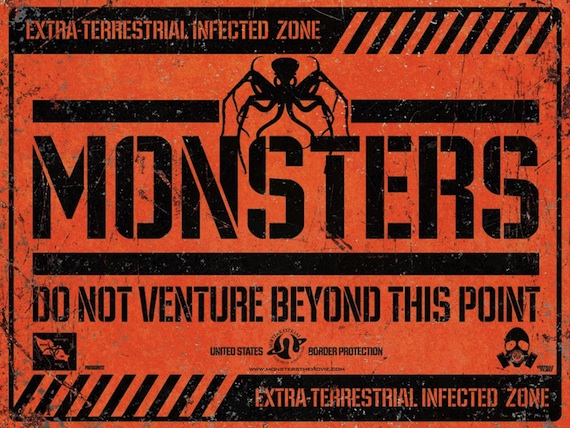 It may remind you of District 9, right down to Sam’s bandaged arm, but it’s different enough so that you won’t think it’s secretly an Asylum knock off.

The action itself, however little it may be, is always filled with suspense. There’s no ridiculous gore in the movie, but it does scare once in a while. Now, this may be a hardcore spoiler, but the climax at the end of the movie will give a feeling I haven’t had in a long time. There’s a moment that I felt it had a little Star Trek subliminal message vibe in it, making you wonder exactly what is monstrous about the monsters in the first place.

If you care more about the creatures than the main characters, I don’t recommend this movie. It’s a romance sci fi monster movie that blends together smoothly. However, no matter the audience, the end will give you a drastic change in the feeling of the movie. In just one moment, Monsters goes much deeper than the obvious metaphor, with the message being something you rarely see in a scifi movie nowadays.

More different than original: B-

Monsters is available now as a rental on iTunes and other Video On Demand services, and will be released in limited theaters in the US on October 29th.
Gareth EdwardsMonstersReview