Tron Night 2010 may be tonight, but Disney staff and select press got an advanced screening this morning of the 24 minute preview for Tron Legacy. We also got to talk to Legacy writers Edward Kitsis and Adam Horowitz (Felicity, LOST) in a roundtable setting. Listen to the audio from that interview after the break, as well as brief description into the footage shown (note: there are some small spoilers). Our own Steve Kidd will later detail the footage in conjunction with his take on the real Tron Night experience.

Unfortunately, the Disney Studios lot in Burbank doesn’t have an IMAX screen, so we saw Tron Night Morning Edition on a regular 3D screen. First of all, it should be noted that only the scenes that take place in the digital world. This, along with the reveal of CLU 2 as the sort of overlord of the Grid, gives the movie a real Wizard of Oz feel, which we talk about in the interview. Also, a lot of the scenes screened have already been shown at least in part through trailers, promotional clips, and Comic-Con footage. 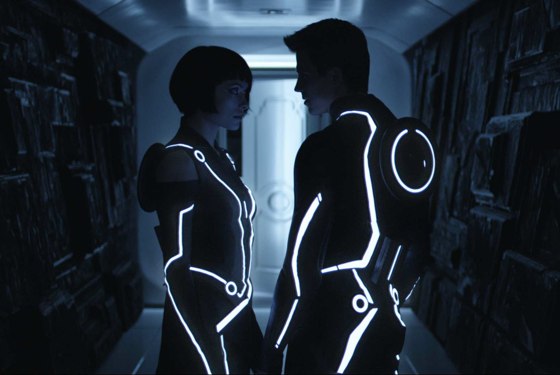 We start with Alan Bradley (Bruce Boxleitner) telling Sam Flynn (Garrett Hedlund) that he was paged by Kevin Flynn (Jeff Bridges), even though he’s been missing for 20 years. Sam eventually decides to check it out and goes to Flynn’s Arcade, where he finds the hidden office. He gets transported into the digital world, where a recognizer picks him up. He is chosen to go to “Games”, and is dressed by some lovely ladies into his uniform. Then we see him fight a program with the light discs and win. Later, Quorra (Olivia Wilde) helps him escape the Grid and brings him to Kevin. Quorra seems to be Kevin Flynn’s apprentice, and I don’t think it was Kevin that sent that page to Alan.

My thoughts on the preview are mixed. Everything looked great except the 3D. It was barely noticeable. Maybe on IMAX it pops out more, but it was negligible on the average-sized screen I saw it on. Also, I was disappointed that they showed a lot of what we had already seen. I will say that the light disc battle was pretty badass, and the visual effects overall are stunning.

Listen to the roundtable interview below, in which Kitsis and Horowitz talk about all kinds of stuff, including the viral campaign (around the 11:50 mark and a few times after that).