Skyline Review: Are Special Effects Enough To Make A Movie?

The alien invasion thriller Skyline opened up this weekend, and the question on everyone’s mind was if special effects can replace big names, set pieces, and budget to make a convincing sci-fi film. Skyline definitely answers the question, though you may be surprised by the answer. Get the full review (with mild spoilers) after the break.

Skyline is directed by FX gurus (and brothers) Colin and Greg Strause, whose only previous directing gig was Aliens vs Predator: Requiem. After working on many sci-fi projects through their FX company Hydraulx, the brothers decided to see if they could make their own movie and on a tight budget. How tight? Only $10 million dollars. This was achieved mostly through using C-list or lower actors and a single set (Greg Strause’s condo building in Marina Del Rey, CA). They made up for it by doing over 800 VFX shots, taking the recent development of high concept films on low budgets to the extreme. But, does it make a good movie?

The film starts off on Day One of the attack. Couple Jarrod (Eric Balfour) and Elaine (Scottie Thompson) fly out to Los Angeles for their friend Terry’s (Donald Faison) birthday. Terry has made it big in Hollywood, so he lives in a Penthouse and has a pretty extreme party. After mostly everyone leaves for the night, they are woken up by bright blue lights decent from the sky. We find out that the light takes over your body and compels you to come out in open so “they” can snatch you. After the first wave, Jarrod, Elaine, and Terry, as well as Terry’s wife Candice (Brittany Daniels) and assistant Denise (Crystal Reed), have to figure out how to survive this horrible event. 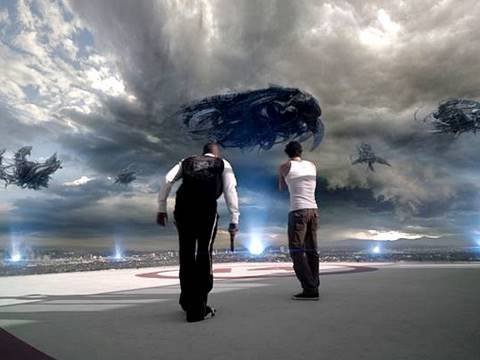 The group eventually teams up with apartment employee Oliver (David Zayas) as the humans start to fight back on Day Two. The big ships in the sky aren’t the worse of what these things have to offer. These aliens are unique in that everything seems to be organic, including the ships themselves. There are several different types of aliens that go around hunting down any remaining humans, and all of them are menacing.

This movie is definitely intense. There are effects around every turn, and they all look great. This is how you make a small film look big, especially with the wide views of the Los Angeles landscape. The aliens are scary and gross, and their reason for coming looks to make sense at least on face value. Sure, the acting is only so-so, but when you have the start of an intergalatical war, big explosions and stealth bombers certainly make up for any flaws (including minor plot holes, continuity issues, and questionable dialogue/character choices).

Overall, I was actually impressed with Skyline. This could have been a trainwreck, but writers Joshua Cordes and Liam O’Donnell kept the story simple while the Strause brothers made the visuals stunning and massive. While the cliffhanger ending may upset some people (the bros are already working on a sequel), the final scene is truly badass.