Tangled is Disney’s take on the classic German fairy tale of Rapunzel, and like most Disney adaptations, it skews far from the original story. The question you’re all really asking, though, is does Tangled harken back to the days of Disney classics like Aladdin and The Lion King, or is this another Home on the Range or Chicken Little? Find out after the break.

In Tangled, the woman we come to know as Mother Gothel (voiced by Donna Murphy) is an old woman who stays looking young by singing a special song to a special flower hidden away from the classical kingdom. However, the healing power gets transferred to the newborn Princess Rapunzel, or more specifically, her hair. Since cutting her hair makes the power go away, Mother Gothel kidnaps the baby and hides her at the top of far away tower that has no exit.

Rapunzel (Mandy Moore) grows up in the tower alone aside from the occasional visit from Gothel, who she thinks is her mother. Everything seems fine and dandy until she meets Flynn Rider (Zachary Levi), a thief who hides out in the tower after stealing a crown from the kingdom. Rapunzel hides the crown and promises to give it to him only if he takes her to see the lights she sees every year on her birthday (which just happen to be floating lanterns sent up by the King and Queen and their subjects in honor of the lost princess).

Thus the two set out on an adventure that marks the first time Rapunzel’s been out of the tower, and the first time Rider’s had a good influence in his life. I was impressed by how tight the entire story is through the end, with the “live your dream” theme being a great way to make the Rapunzel story interesting (not to mention a perfect Disney slogan from which to pillage). 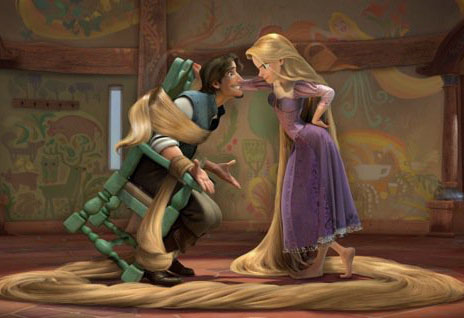 All the characters are great too. Levi and Moore have great chemistry, and though I thought the star of NBC’s Chuck was a strange choice for such a suave character, his voice and comedic tone are perfect. The side characters are just as fun, from Rapunzel’s pet chameleon Pascal, to the anger management-needing horse Maximus, to the thugs we meet in the sweetly named Snuggly Duckling tavern. Sometimes those one-dimensional characters get old quick, but I found the use of Pascal (and to a lesser extent, Maximus) to be spot-on. In fact, I wanted to see more of the lizard!

Finally, the music. Alan Menken is on board as composer for the score, and if you don’t think that’s a good sign, just look at his resume. The songs here are fantastic, and while they may not be as memorable as “Be My Guest” or “Kiss The Girl”, they will certainly enchant you. The emotional climax, involving one of the songs and the lanterns, actually made my eyes water a bit, even under my 3D glasses. By the way, the 3D is good, though subtle.

This is easily Disney’s best film under the Walt Disney Animation Studios moniker (it was known up until 2008 as Walt Disney Feature Animation). Aside from the computer animation and 3D, this will make you feel like you’re watching a movie from the Disney Renaissance period. That’s a very good thing for a department that has in-company competition from Pixar along with outside animation studios threatening make classic Disney movies obsolete. If Tangled is any indication, that isn’t happening any time soon.

Tangled opens in theaters across the US on November 24th. Stay tuned for Kris’s take on the film, which involves more in-depth analysis of the history of Disney animation.