Tangled Viral Campaign and Film Review: Is This The Beginning or End of Disney Classics?

Walt Disney said that “We keep moving forward, opening new doors, and doing new things, because we’re curious and curiosity keeps leading us down new paths.” Disney has continued his idea with Tangled. Still, does that mean it is the end of Disney classic fairytales? Was the campaign an insult to the movie, or its saviour? Find out as I review both the movie and it’s viral campaign after the jump.

The Movie: Where does it stand?

Can you guess how long a Rapunzel tale has been in the making? If you say anything less than 20 years, you’re still wrong. Walt has always wanted to make a Rapunzel tale but couldn’t. Animation fans can love 2D animation all they want; Rapunzel’s hair would look too dull. With the latest CGI being able to show every single strand of hair in photo-realistic fashion, the wait was worth it. Now, technically this movie has been in production for around 20 years. Originally it was going to be traditional 2D, but 6 years ago there was a total revamp of the crew as it changed to a CGI project, but it was still for the better. 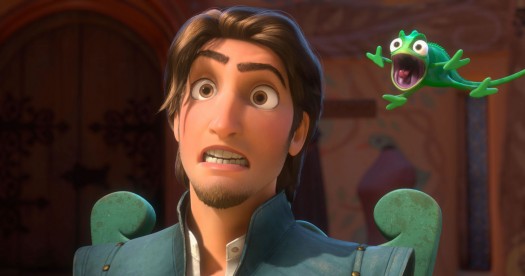 The animals don't talk, but they express their emotions more than most animal sidekicks you'll find.

This isn’t Disney’s first time using CGI in a classic musical though. The Disney renaissance started blending both CGI and 2D. This continued on even past the renaissance and into Disney’s next change, where it stopped making musicals and more original stories. Lilo and Stitch’s parody trailers just slapped that age away, making it clear that classic fairytales are history. Don’t get me wrong, those movies after the renaissance were hilarious and entertaining, but just focused more on comedy than story. Princess and the Frog was a mediocre film that was more homage than continuation. The classic era is over and time to move on again.

That’s what makes Tangled a landmark film. It’s the Snow White of the 21st century! The 50th animated musical, the first to be completely computer animated, their first 3D musical fairy tale, and so on. It’s a completely new experience and we get a good taste of what it felt like to be in 1937, sitting down in a theater to watch the first animated feature length movie. Now it’s 2010, and you can sit down in a theater to watch the first 3D CG animated musical. 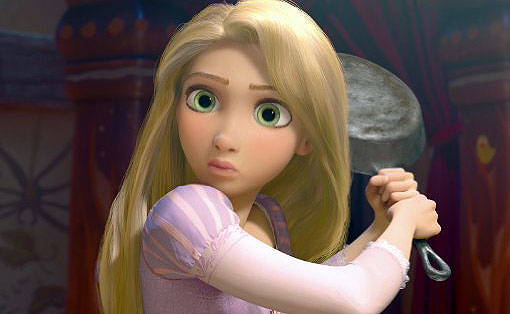 Cue the frying pan, the most powerful weapon a person can wield

So, how is the music itself? Honestly, I don’t think it was better than that of Aladdin or Beauty and The Beast, but it had all of their elements, and then some. The music was in a 60’s folk song style mixed with Celtic background, which fit the setting. Just because it’s not better doesn’t mean it’s bland though; it really does stand out and is very well constructed, even though it follows the same pattern as always: A solo song just about the main character, a villain song that is to be intimidating and/or frightening, a comical and visually stunning musical number, and a finishing song that intensifies a climax in the female and male character’s romance. The formula never gets old and always works, so why change it? Donna Murphy, Mandy Moore, Brad Garret, and rookie singer Zachary Levi all give a stellar performance. I’ll admit, Glenn Slater’s lyrics aren’t anywhere near as incredible as Howard Ashman’s, but the lyrics move with the story and visuals. Also, the reprisals were the best I’ve ever seen in a Disney flick! When Rapunzel first leaves the tower and Mother Gothel’s reprisal of “Mother Knows Best” are incredible. They give the end of Hunchback of Notre Dame’s “Bells of Notre Dame” reprisal a run for it’s money. Even if you don’t think the songs are eternally memorable, they were used perfectly with the story.

The story is wonderful, but I know that a lot of Disney fans are upset over the title change.  Of course this is a result of Princess and The Frog’s under performance, which they blame on it being to “girly.” So, in an understandable response, they changed it to “Tangled”, and Flynn’s character was made more equal to Rapunzel. I’ll admit, I do think Rapunzel was the focus of the film slightly more than Flynn, but I feel that it worked for the better. It made his character stronger and less complex as Rapunzel, so his image was played out in a perfect balance. Mother Gothel is the most deadliest villain ever created by far. She may not be the most powerful being on earth or have an entire city’s guard at her command, but she has the most powerful weapon a villain could have: love. Gothel used manipulation and love to keep Rapunzel in her grasp, almost the same way she used her beauty on men. Love is the strongest weapon anyone could have, and Gothel played it masterfully with her clever wording and trickery, and doesn’t hesitate to kill for what she wants. Personally, that puts her up to the top as the most cruel and evil villain of them all. As far as the comedy goes, Flynn and Rapunzel handle most of it, but the pub thugs really steal the show. The comedic duo of a fat guy and a skinny guy are absent, but who needs them when you got a pub full of different characters who aren’t nearly as vicious as they seem.

The accuracy to the original story is questionable. While the basic idea was there, the main focus of the original story was a girl’s sexual awakening as she first hits puberty. However it was also a story of a girl breaking free with the help of a man who rescues her from the tower. At the very least, they kept the plot point where he is mortally wounded and then saved by Rapunzel.

As far as the cast and crew goes, I’m very glad the directors of Bolt made this movie. I was very entertained by Bolt and confident they could pull this off. Zachary Levi has always kept a good mixture of suave and comical humor in Chuck (at least in the latest seasons), so playing Flynn Rider was a perfect choice, and that goes with the rest of the cast too. Rapunzel is unlike any other princess; she’s multi talented, strong, and not stunningly beautiful but more homely and cute, and that fits Mandy Moore’s persona. Donna Murphy is an excellent blend of a mature woman and a strong voice, with a voice that could charm and frighten you. Brad Garret as Hookhand…..well, if you have seen Everybody Loves Raymond, you know he’s the best man to play Hookhand, easily the funniest character to sing in the movie. A lovely little story behind the movie itself is that this entire experience is Zachary Levi’s dream, which is very touching and makes you feel so happy for him. He’s idolized Disney films for so long, and now he’s in one of them.

This isn’t better than Aladdin, Beauty and The Beast, Little Mermaid, and other classics. Tangled isn’t worse either, but just as good. Even if the music and story isn’t as good, the fact that it’s the first to be 3D brings it up to those ranks.

I know, I know, it was false marketing, but Disney has also done something new with a Disney classic that they’ve hardly done before: a viral campaign. All the trailers and viral videos made the focus on Flynn Rider and, for some reason, gave a Dreamworks-like parody feeling. I honestly have no idea why though; I didn’t see any fart jokes or making fun of the tale itself. But, Disney has done this before with a movie like The Hunchback of Notre Dame. While it looks like a romance comedy, it was most definitely Disney’s darkest film that was based on the worst views of humanity, with a plotline driven by lust and sin. Still, at least it showed it was a musical.

However, despite it’s blatantly inaccurate advertising, it is still the first Disney classic to go viral. People will be expecting a regular CGI film and not a musical. It was implied that it is more gender friendly and, with the title being “Tangled” and not “Rapunzel,” it would get more boys to see the film. This also brought a subtle word of mouth viral for those Disney fans that bothered to do a little research. Tangled forums like IMDb’s have had constant user complaints of a mediocre Shrek rip-off that they judged just from the trailers, but Tanglers (people who support and love the movie, like myself) all defend the film and clarify what Disney’s marketing is doing. Those who didn’t will be taken by surprise. Frankly, I’m just glad they didn’t add the kung fu hair or being thrown out of a window.

Despite all this, it works. It’s even doing better than Disney anticipated, with $69 million at the end of the extended holiday weekend. Their parody videos drew in some of the viral community and parents will trust the Disney logo to take their kids to a safe family film. Sure, it pissed me off; they came out with a trailer that was made almost entirely with test footage, then repeatedly released concept art for almost half a year. The 2 months before the movie came out in theaters they showed a new video each day. These included viral videos, movie clips, sneak peeks, trailers, and rewards! That makes up for such a long gap in the advertising, and you have to respect at how their marketing will attract the audiences. Of course it was totally worth more than half of the movies budget. That’s right, more than $100 million was spent on 2 months of actual work. The Dark Knight’s extensive-and legendary-viral campaign cost $150 million, and if you follow viral campaigns then you know that it is completely understandable. 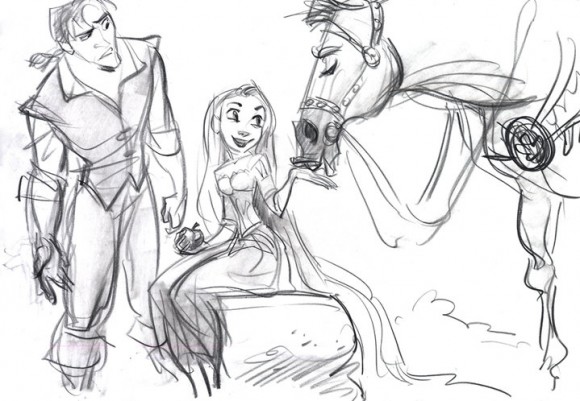 It must have cost a million to show each one

The best movies aren’t ones that just have good visuals, storytelling, or acting. They’re the ones that do something new and change film as we see it. Had this movie been regular 2D animation, I wouldn’t give it a high score, but with it’s bucket list of first accomplishments and incredible 3D that rivals Avatar and How To Train Your Dragon, I can definitely give this movie the rating it deserves. You will laugh, dance, sing, and keep a happy feeling when you leave the theater. Hell, it moved me emotionally and got me to cry, which is a VERY hard thing to do. I’m sure that the lantern scene will dazzle and move you.

So, here are my final thoughts: It’s an evolution in Disney animation, and it deserves to be a landmark in film history. Friends and family know that I love District 9, it’s my favorite movie for all time, but Tangled sits right next to it now. Hell, they’re complete opposites, a lot were surprised at how much I liked Tangled. This shouldn’t be the end, and it definitely won’t be. This could be the beginning of a new era in animation, and Disney should pursue it.

Oh and by the way, while Kida is still the most badass princess Disney has ever created, Mulan can suck it. A frying pan is superior to a sword any day.
ReviewTangled