So you might be aware of this thing called TRON: Legacy that has been steamrolling its way through entertainment culture with resounding hype heard ‘round the world. You may not know just how deep the hype rabbit-hole goes, though. Today is the proof in the electroluminescent pudding: hundreds of people around the United States searched for a single sticker in each of 16 major U.S. and Canadian cities for their chance at taking home what would likely be some excellent swag while being one of the 16 lucky people to help push this game to the end; all while hundreds more watched online as news spread of their efforts. A year of effort by the 42 Entertainment puppeteers and Flynn Lives fans culminated in today’s nationwide event. What follows is a summation of the day’s events and the conclusion to what is arguably the most elaborate alternate reality marketing effort to date. (More after the jump)

For the uninitiated, TRON: Legacy has had a more interactive marketing push: the Flynn Lives Alternate Reality Game (ARG). The ARG had people show up at specific locations, run through city streets, and solve online puzzles to get tidbits about Flynn (the main character of the original TRON from 1982) and the Tron universe while systematically uncovering more of the story between the two Tron movies; all under the guise of proving that “Flynn Lives”. In exchange, 42 Entertainment has hosted small events, large gatherings for Encom Corporation announcements, built a full size mock-up of Flynn’s Arcade with a secret door to Flynn’s laboratory (where the participants get sent to the computer realm and hang out in the End of Line Club from the movie), and provided Flynn Lives followers with piles of free, high-quality Flynn Lives swag. Hence, Flynn Lives has established itself as one of the most rewarding, imaginative, and engaging ARGs ever.

On December 1, 2010, Flynn Lives revealed the “Final Countdown”, an online puzzle that was solved in a few hours by the folks over at Unfiction.com (a website, wiki, and forum community dedicated to ARGs). It contained a counter that indicated something big was going to happen on December 8, 11:00am EST. It referred to a prior puzzle (Flynn Frontier) that revealed a book tour in the past by Kevin Flynn. The Final Countdown made clear that something called the Digital Pulse would happen in 16 major cities linked to the book tour at the prescribed time. The players in this ARG community had one week to prepare.

An ARG is nothing if there isn’t a significant community following the puzzles and talking about it to help generate the marketing buzz that is the true goal of any ARG. For the next week, ARG followers at sites like Unfiction.com and SomethingAwful.com proceeded to put together teams in the major cities, set up meet-up locations, establish city coverage plans, and organize communication hubs (i.e. Twitter and texting) to increase their chances of being first ones to whatever event would be taking place. Many people demonstrated their dedication to Tron and Flynn Lives by taking the day off work to leave them free to pursue this next puzzle, even if that meant sitting at their computers offering information and watching the entire event take place. This fan dedication is evidence that this whole ARG thing actually works when done properly. People that love a franchise such as TRON are willing to focus significant portions of their life on what many view as simply an over-baked marketing scheme.

However, to many, an ARG like Flynn Lives generates its own community of like-minded individuals who are willing to share in the material gains instead of fight over them. The community itself takes on a shape and character of its own; a character generated by the efforts of the individuals to shape the group dynamic. The evidence of this particular community was clear in how today’s event progressed. For instance, repeatedly people would get to the location and deliberately wait for others to join in them, then willingly hand over prize items to others on scene. While this may not have been the case at every location, the Flynn Lives crew at Unfiction repeatedly held themselves above reproach in their pursuit of this puzzle. So what exactly happened today, anyway? 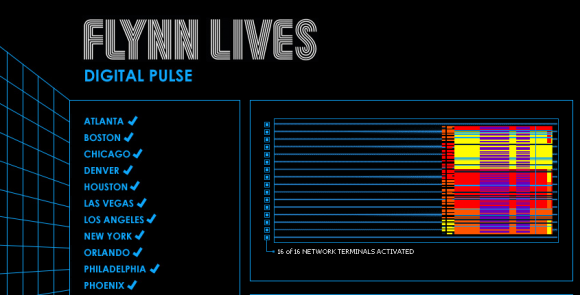 With anxiety and hope, hundreds of people in more than 16 US, Canadian, and British cities waited for the information that would spark the frenzy. Some people waited while watching several feeds from Twitter, or Facebook, and others gathered at predefined locations at 7:00am on the west coast. Shortly before the game began, the primary Flynn Lives twitter account @operationtron gave a pre-game warning, “ALMOST TIME!!!” Waiting on the edge of their seats, the players were primed and ready for they-knew-not-what.

At 11:00am EST the Digital Pulse site went active, displaying the list of sixteen cities and a counter for sixteen “terminals” yet to be activated. Immediately thereafter the site displayed the first two cities, Toronto and New York City. Each city linked to a PDF file (e.g. New York City) displaying coordinates and pictures of the location to be found with instructions on what to do when the players arrived. Twitter, texting, IRC and other methods of communication all exploded into action. Players used Google to convert coordinates to addresses and intersections, used Streetview to identify landmarks to aid the search while others on the ground converged on the location in the attempt to be first. As this was the first time the instructions were seen there was the expected confusion of what to do combined with ample speculation. What would they find? What were they supposed to do?

It turns out they were to find a small TRON sticker and call the phone number for further instructions. However, there was a significant restriction: only ONE person would get the instructions. What was once a collaborative effort towards group rewards became an individualistic race. At this point you would expect people to clamber over each other and fight for the opportunity. Once again, the community demonstrated its true character. At nearly every location, communication, collaboration, and generosity won the day.

In what is largely viewed as a serendipitous occurrence, an administrator of the Unfiction forums, thebruce, and his team were the first to the Toronto location, make the call, receive the package, and solve the puzzle. Immediately pictures and descriptions went out across the “ARGsphere” (the combined communication network supporting the ARG players) sharing the news, informing the players of what was to be expected as there was a puzzle to be solved. New York City’s puzzle was completed shortly thereafter.

The first person to find the sticker was to call the number on the sticker and wait for a package to be delivered. A delivery person in the guise a “Dumont Shipping” work-shirt arrived, remained in character, (picture credit: coasterg), verified the receiving individual with a signature, and handed over the package. The player was told not to open the package until they arrived at a second location to be revealed. Inside was a hollowed-out version of what was Flynn’s newest book, The Digital Frontier, containing the puzzle items: a few sheets from a TRON arcade game instruction manual and a puzzle clue with which to determine a code to enter into a laptop at the second location. (picture credit: thebruce) This location was given to the player several minutes by phone after receiving the package. At the second location a person involved in conducting the ARG was waiting with a laptop and internet access so the code could be entered, and the “Terminal” would be activated. Once the code was entered, Flynn Lives t-shirts and pins were handed out to the few players actually solving the puzzle. The Digital Pulse website was then updated with the activated terminal and the code name of the player who received the package. This news then spread across the ARGsphere while players waited for the next round of cities.

It was quickly revealed that two more cities would be revealed, on the hour, from east coast to west coast. After Toronto and New York City, the order was Boston and Orlando, Atlanta and Philadelphia, Houston and Chicago, Phoenix and Salt Lake City, Denver and Las Vegas, Portland and San Francisco, and finally Los Angeles and Seattle. In one instance, a player was waiting so close to the location that he observed the sticker being applied and was immediately on the spot. After eight hours, the sixteen terminals were unlocked and the Digital Pulse image led to a new site, Circuit Pulse.

Once at the new site, players were instructed to remove pop-up blockers so they could view a series of very well done and immersive short videos that popped up all over the screen and subsequently disappeared (Meltdown), concluding with an image of the new Clu from Tron:Legacy. That also disappeared and you were asked to enter your phone number.

What followed is probably one of the coolest bits of technology in marketing ever seen before. Once you entered your phone number you were immediately called on that number. On screen was a message to enter a specific code on your phone. Once you did this you were required to play a game that required your browser and your phone. Incredible. You then played a game akin to Mastermind where you entered numbers on your phone, watched them appear on the browser screen in front of you, and were given feedback on how many were correct in the wrong position and how many were in the correct position. Solving the puzzle and finding the final code (different for each caller) yielded a final image: a pager.

“RustyMuffler”, a member of the Unfiction forums, is credited with the first speculation that the “Digital Pulse” at end-game would be to send the page to Alan’s pager from Flynn’s Arcade, as seen in the Tron: Legacy trailers. This is exactly what happened. Kudos to you, RustyMuffler. On this pager was a phone number. This led to a voicemail that gave a 12 digit code to enter on HelloFlynn.com, unlocked the final “badge”, or achievement, stating “End of Line”. But wait, there’s more! It turns out there was one more code on the pager: morse code in the red flashing light. This decoded into “electrify”, pointing players to another site, Electrify, specifying locations and time for free TRON: Legacy screenings in all sixteen of the involved cities on December 13, first come, first served.

For many people, this marks the end of a journey lasting anywhere from a few months up to a year. Friends were made, stories told, TRON swag won and traded, and the world prepared for the long-awaited sequel to TRON. Many people will be able to see the movie for free on December 13. Many people have posters, pins, postcards, T-shirts, stickers, tickets, wristbands, identity discs, or even Encom security badges. What they – what we – have all had together is an experience; and with one of the best online fan-based communities out there. All thanks to Flynn Lives, 42 Entertainment, and Disney. On behalf of Flynn Lives players and communities like Unfiction, so long, and thanks for all the swag.