Super 8 Viral: New Print Out Could Lead To Another Chat

The STIES website has yet another new printout, this time revealing a book that references the ID badges we saw before. Mysterio’s response to the book is to have another chat, but when exactly will it be? The Super 8 viral wages on.

The STIES site is a remote desktop of an old PDP-11 that is being used as a communication device between Josh Minker (here’s his blog) and an unknown contact (hereuntoafter known as Mysterio). We don’t know who is using the computer, but we do know that Minker unknowingly has some possessions that could lead him to learn more about his estranged father, thanks to Mysterio. 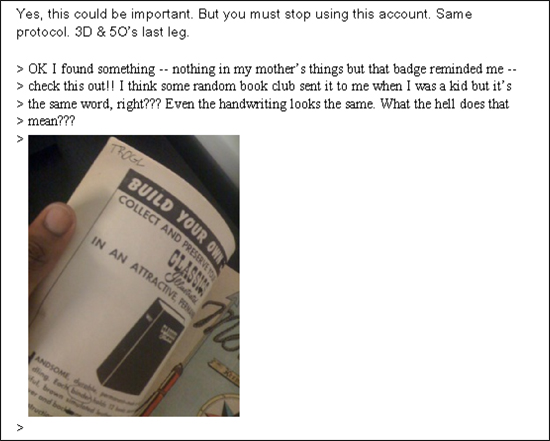 Every once in a while, we find a new print out (via the hidden print command window) that seems to be some kind of email exchange between the two characters. The most recent one is a follow up to their recent conversation, in which Mysterio told Minker to keep looking for anything relevant in his mother’s things. He finds a book with “TROGL” written in it, just like on those military ID badges. Similar to their last conversation as well, Mysterio uses a code, “3D and 5O’s last leg”, which last time specified a date for them to have a live chat.

The book is Moby Dick, and the word “binder” is circled, leading most to believe that the word will be the password needed to unlock the new chat log when it becomes available. When will we see the chat? Based on Unfiction’s decoding of the “3D and 5O” clue, it will be on December 16th at 8:03 p.m (don’t ask me how it works, I still don’t get it). For more speculation and cool findings, check out the Unfiction forum thread on this topic, as well as the post on Super 8 News.

Find anything else? Let us know in the comments below! Learn more about Paramount’s Super 8 and its viral campaign on our Super 8 Viral Page.
Josh MinkerScariest Thing I Ever SawSuper 8