FX Series “Lights Out” Wants You To Knock Out A Heavyweight

Basic cable is the new home for complex dramas, and FX looks to continue the trend with their boxing series Lights Out. The show follows heavyweight fighter Patrick ‘Lights’ Leary,” played by Holt McCallany, and FX has created a live-action online game where you can fight Leary. Check out the press release with link (courtesy of GeekTryant) after the break.

Fans will receive a unique opportunity to step into the ring alongside heavyweight boxer “Patrick „Lights‟ Leary,” played by Holt McCallany, in a live-action interactive game based on the new FX original drama Lights Out, premiering Tuesday, January 11 at 10 PM ET/PT.

The Lights Out Game drops players into the boxing ring for an amazingly realistic first-person fight experience challenging “Lights” Leary for four rounds of brutal action. Unlike most games which are rendered, the Lights Out Game is composed of hundreds of individual video segments captured over a two-day period with McCallany. The game was developed in partnership with Ralph Interactive, a company known for developing immersive entertainment experiences.

A true multi-platform experience, the Lights Out Game is available at FXNetworks.com and on the Lights Out fan pages located at Myspace.com and Facebook.com. It is also available as a free download from iTunes at: http://itunes.com/apps/LightsOutGame. Users can play online and also via handheld devices such as the iPad, iPod Touch or iPhone. Additionally, players online at LightsOutGame.com can enter a weekly high-scorer contest for a chance to win a $1,000 grand prize or one of three second prizes of $500 – official rules and details are available at www.lightsoutgame.com.

For those of you not familar with the new show, here is the official Lights Out Synopsis:
Lights Out, from Executive Producer/Showrunner Warren Leight (In Treatment, Law & Order Criminal Intent), stars Holt McCallany (CSI: Miami) as “Patrick „Lights‟ Leary,” an aging former heavyweight boxing champion who struggles to find his identity and support his wife and three daughters after retiring from the ring.

The financial downturn coupled with a series of failed investments leave him at a perilous crossroads – battling the urge to return to boxing or reluctantly accepting a job as a brutal and intimidating debt collector. Catherine McCormack (Braveheart) co-stars as “Theresa Leary,” Lights‟ wife who is finishing her medical residency; Pablo Schreiber (The Wire) as “Johnny Leary,” Lights‟ brother and business manager; and Stacy Keach (Fat City) as “Robert „Pops‟ Leary,” Lights‟ father and former trainer who runs the boxing gym owned by Lights.

Clark Johnson (The Shield, The Wire) and Norberto Barba (In Treatment, CSI: NY) directed the pilot episode. Series Creator Justin Zackham (The Bucket List), Phillip Noyce (Salt) and Ross Fineman are also Executive Producers. Lights Out is produced by Fox Television Studios and FX Productions. FX has ordered 13 episodes of Lights Out, which was filmed in New York. 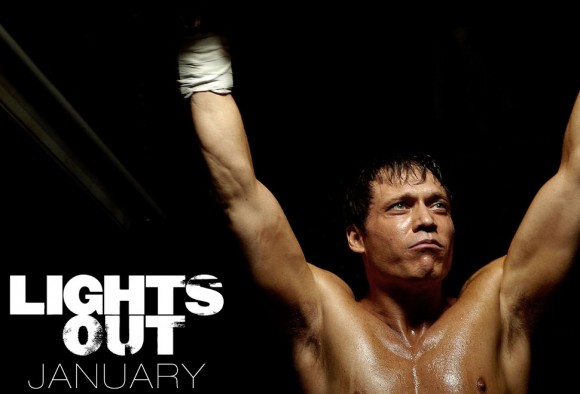