Last week we told you about Fox Searchlight dabbling in some viral for their Ed Helms-starring comedy Cedar Rapids, which is set to premiere at the Sundance Film Festival. I was a bit harsh in my assessment of the endeavor, and it looks like it wasn’t a one-off thing.

The film is about an insurance agent (Helms) who goes to Cedar Rapids, IA to represent BrownStar Insurance at a convention. Fox Searchlight mailed out a calendar and business card for Brownstar that gave a phone number, website, and made reference to Sundance. The website was under construction, but now it is live, though it is still pretty thin in content. There’s only two pages, one that gives bios of the main characters, and one that allows you to put your head into an ID badge for a number of the fictional insurance agencies with funny names and imagery.

What’s more interesting is something I heard about the film’s viral presence at Sundance. Ignition Interactive seems to be heading up the marketing, and they have let us know that they will actually set up a BrownStar Insurance office at the film festival. While we don’t have anymore details, below is a picture released by their Twitter account. This is more like it. 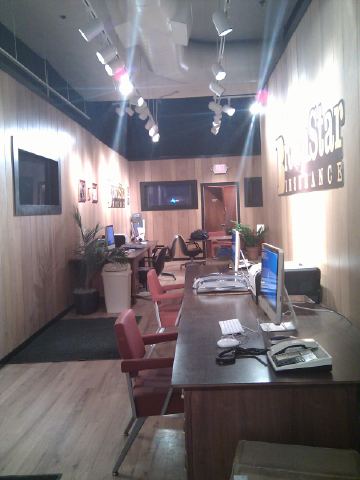