After a major break in the Super 8 viral campaign, we suddenly got a rush of updates at the end of this week. First, despite the fact we haven’t heard from him, as well as Mysterio asking where he was, Josh is definitely alive. We also learn that his house was broken into, and that his new conversation with Mysterio about it has lead him to falsely update his blog. Probably the most interesting update is a map found on the STIES website. Get all the details after the break.

When we last left off, Mysterio had given Josh a picture of his father, and since then, Josh went AWOL, missing his next meeting with Mysterio, who you should remember is a former co-worker of Josh’s father. Then on Wednesday this week, Josh updated his blog to let everyone know he’s ok:

Sorry for the silence. Just had some unexpected things come up. In case you were bothered about the coelacanth, I never got and won’t attempt to again.

At that same time, a new print out showed up on the Scariest Thing I Ever Saw (STIES) website that gave Josh instructions to go to the chat log the next day. Josh and Mysterio had their chat (accessible on STIES and here), in which Josh informs Mysterio that someone broke into his house and looked at his files, though nothing was taken. Mysterio explains that Josh’s father was a biospeleologist (someone who studies cave-dwelling organisms), and that he was working on an alternative energy source involving foreign matter, which he hid somewhere. Obviously, a good guess is that they were working with alien technology and probably reverse engineering.

Mysterio wants the Josh’s father’s copy of Moby Dick and has something to show Josh soon. He also tells Josh to act normal and update his blog accordingly, since the people after the energy source could be very dangerous. Josh does just that, saying:

So I’m sorry to report that I was robbed over the holidays. I’ve involved the police – they told me not to post for awhile just in case. They say my Coelacanth connection must’ve been a shady character. I think he thought I was rich or something. The good news is that none of my fish were harmed. And I’ll be ready if it happens again.

To those of you I know “in real life” – don’t worry. I’m fine. I don’t think they took anything that can’t be replaced.

Our last update is possibly our best. It looks like Mysterio did get around to uploading something for Josh, and it’s a map. On the STIES site, there’s a photos folder behind the command and print windows, and within that is a jpeg image, seen below (taken from Super 8 News, since I can’t seem to find the image’s password). 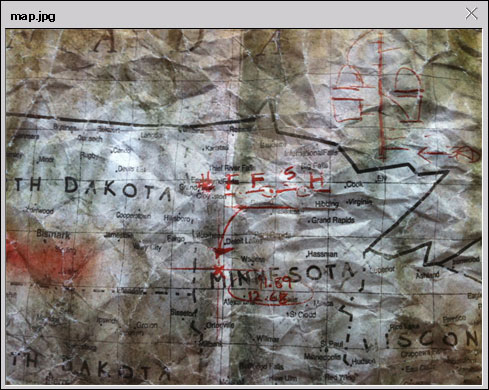 It looks to point to the Fergus Falls State Hospital in Minnesota, which is currently an abandoned mental asylum. The scribbled drawing in red on the top of the map has a striking resemblance to a particular staircase in the hospital, seen below at the right angle. 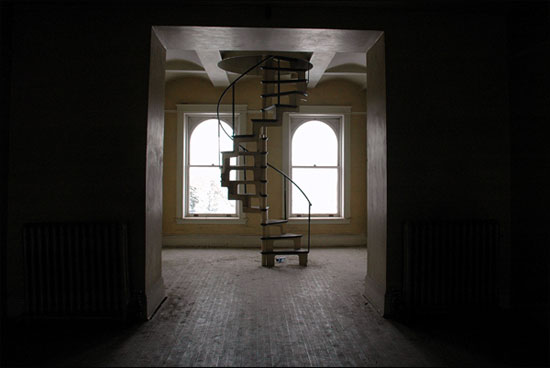 “3RD” is written next to the drawing and pointing near the bottom, and since this staircase is on the 3rd floor of the hospital, there’s a good chance this could be where the energy source is hidden. However, the hospital was also known as “Third Minnesota State Hospital for the Insane”, so it’s hard to tell for certain. Either way, why a mental asylum? Did Josh’s father start talking about aliens and wind up there?

For our continuing coverage of the Super 8 viral campaign and information on the film itself, check out our Super 8 Viral Page.