Movie Review: “Gnomeo and Juliet” Not Your Garden Variety Movie 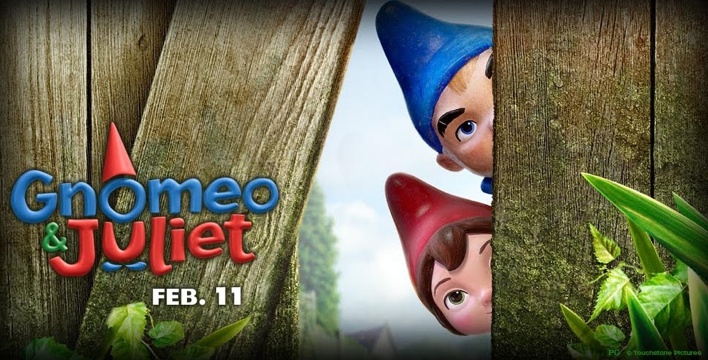 The animated film Gnomeo and Juliet directed by Kelly Asbury asks the question what happens to garden gnomes when the elderly leave the garden? In the computer animated adaptation of William Shakespeare’s Romeo and Juliet, we find out what happens with the assistance of an all-star British voice cast that includes James McAvoy, Emily Blunt, Jason Statham, Michael Caine, Patrick Stewart, and Ozzy Osbrone along with some recognizable American names like Dolly Parton and Hulk Hogan. Okay the last two may have been a bit of a stretch, but that is beside the point. The point is that this film while charming at first, may be uneasy to sit through after the first ten Shakespeare jokes, but it does help to have a strong voice cast and Elton John songs in the movie. Hit the jump to see the full review.

Gnomeo and Juliet is the story of two types of Gnomes, the Blues and the Reds with Miss Montague owning the Blues and Lord Capulet owning the Reds. The two have so much disdain for each other that the garden gnomes they own begin to personify their owners. Both gnome families are a part of a bigger garden picture and each of them has a different job: a fisherman, strong man, flunky, animals, fungi with dog traits, and their prize gnome that will carry out the family name or garden. Juliet (Emily Blunt), a Red Hat, is a sheltered gnome who is constantly defying her father Lord Redbrick (Michael Caine) by stepping out of the prized tower that shines in Mr. Capulet’s home and Gnomeo (James McAvoy), a blue hat, is an adventurous garden gnome who is expected to carry out the family garden after his father was taken away from them. He along with Benny (based on Benevolio) races lawnmowers against the strongest red hat gnome, Tybalt (Jason Statham). Both gnome families are separated by just a fence and once Gnomeo and Juliet find a flower that would not only make their garden shine, but get the respect they deserve, the two star cross lovers finally encounter each other, and it is love at first sight. However the two find out that one is a red hat gnome and one is a blue hat gnome, but find a way to get passed their differences and share their love for one another. From then on they go out sneaking behind their families back as their cherish each moment with each other, while the families continue to find ways to destroy the garden that lies on the opposite side of the fence. 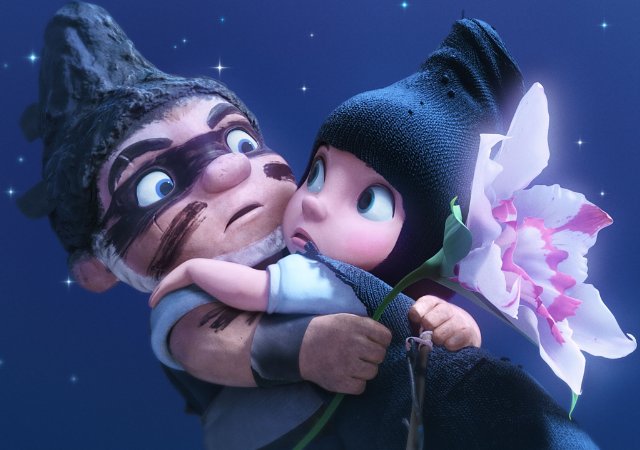 The animation for the Shakespeare adaptation is surprisingly well done. The dialogue is clearly written for a much younger audience and there are a few jokes that adults would get a chuckle at. Those who are familiar with the Shakespeare tragedy will recognize references that Asbury is alluding to in the play such as the opening scene, the love shared between Gnomeo and Juliet illuminated by the moonlight, the Romeo and Juliet balcony scene, and other silly puns made towards the play that is cleverly written. If you look and listen carefully, you will be able to identify the nods to other works written by the famous playwright. The comedy looks like it was taken from scenes from Tom and Jerry: defacing garden art, painting glasses and mustaches on gnomes, multiple similar looking garden gnomes with a brain the size of a pea, a fungi with a dog like personality, lawn are animals with ethnic voices, and garden gnomes purchasing monster truck lawnmowers and having a villainous manic laugh to go along with it, and while that may seem dated, it does humor the audience quite well. There are some tender moments in the film, but they won’t tug at your heart strings like a Pixar movie would. One of the film’s shining gems are the Elton John songs.

Asbury has figured out a way to incorporate the British rock star’s hit songs into the Shakespeare play and make it contemporary. The “dancing” number that Gnomeo and Juliet share when they first meet is perhaps one of the best scenes in the movie.

But one of the most annoying things in this movie is Featherstone (Jim Cummings) a pink plastic flamingo, who doesn’t seem to fit into the world of gnomes, but forcibly tries to be a part of garden variety lawn ornaments. With a Caribbean accent, Cummings tries to be the voice of reason when Gnomeo and Juliet have a minor dispute. Featherstone’s sense of humor, constant laughing, and voice grew boorish and tiresome as soon as he is let out of the garden shed.

The film has the potential to be a watchable film, but one can’t help but compare this film with Toy Story, and Gnomeo and Juliet is certainly no Toy Story, but it does separate itself from Toy Story by utilizing the Shakespeare tragedy, strong voice cast, and songs from Elton John. 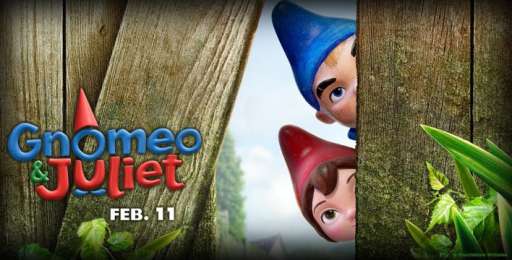