Jonathan Liebesman’s alien invasion film Battle: Los Angeles from Columbia Pictures opens this weekend, and the question everyone is asking is whether or not this is just another Independence Day, or worse, another Skyline. While I am a big fan of the former and an apologist for the latter, this is definitely a unique film to the sci-fi sub-genre. Read my mildly spoilerish review after the break (I’m testing a new format, so let me know what you think).

Aaron Eckhart stars as Michael Nantz, a Marine Staff Sergeant that is just about to retire when he’s called back into duty thanks to an alien invasion. The aliens are landing in the ocean just outside of the world’s largest cities, including Los Angeles, where Nantz is based. Most of the other cities have fallen, but L.A. still has a chance. Since it looks like the enemy only have ground troops, the military decides to set up a perimeter around Santa Monica, where the aliens are surfacing, and just bomb the hell out of it. While most civilians have evacuated, the Marines send in a few platoons to retrieve the remaining known civilians before the bombs drops. The film follows Nantz’s new platoon as they make their way through the hot zone.

1. Gritty, Intense Action – As advertised, this was a gritty war movie that just happened to have aliens as the enemy. Battle: Los Angeles is the most intense movie I’ve ever seen, though the fact that I don’t really like war movies might dampen the impressiveness of that statement. The movie has plenty of in-your-face action, and it’s set up pretty early in the fight that anyone can die. When they are in a hot zone, you can feel the tension, and when they start fighting, there’s no holding back. The comparisons to Black Hawk Down and Saving Private Ryan are justified, as is one character’s comparison to Fallujah.

2. Realism – Following along the lines of the grittiness of the film, you really get a sense that this is how an alien attack would happen. How the aliens arrive, along with what they came for, make perfect sense. Also, Earth (and ipso facto Nantz’s platoon) gets it’s ass handed to them by the much more advanced enemy. Even the ending is realistic. This isn’t a glossy film like ID4 where a Mac virus destroys the entire alien race. As the film’s title perfectly alludes to, this is just one battle in a much bigger war.

3. Retreat, Hell! – I wouldn’t be surprised if Battle: Los Angeles is really just a sneaky attempt by the US Military to recruit Marines. The men and women in this platoon are fighting for not only their home but for each other, and their commitment to serve in what would make any normal person soil themselves is remarkable. While this may make some decide never to go into the military, risk takers who want to fight for something may look to this film as the ultimate example of what makes a Marine great. 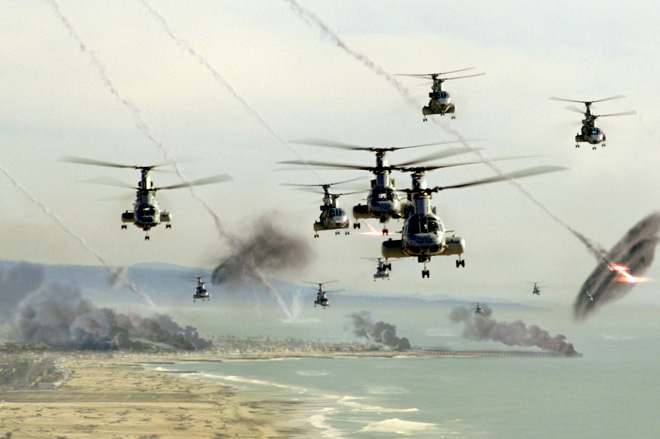 …And What I Didn’t

1. Plot – It didn’t need to be anything special, but once you step away from the intense experience and think about it, the plot of Battle: Los Angeles is actually rather simple and redundant. The platoon has to get to a certain point by a specific time in order to get to safety. Then they do that same thing two more times until they finally have a chance at doing something proactive. It makes sense for the story, and you don’t even notice it at first, but I think something a bit more dynamic would have added a bit of intellectual flavor to this action stew.

2. Shaky Cam – I HATE shaky cam in all of its forms. It’s what killed the Bourne sequels for me. The entire film is shot in this style, which works pretty well for some of the action sequences, but in the few quiet moments that we get, I feel like the camera operator was having trouble focusing on his job.

3. Cliches – Sure, all sci-fi films have them. And too be honest, they aren’t that bad here at all. The worse comes in Nantz’s troubled background and how it affects his platoon. We also get a few cheesy moments and lines, including a “round up the troops” speech from Nantz, but they still feel kind of organic. Real people don’t give ID4 speeches, and sometimes you have to cling on cliches to get people through a tough situation.

The two other films I heard Battle: Los Angeles being compared to were District 9 and Cloverfield. In fact, there are some elements of all four similar films in BLA, but what separates it from the bunch is the way it treats the military response to such a unique and unfathomable event. They fight the enemy like they were any other. You find out how their command works, how to kill them, and you do what needs to be done. The platoon’s backs are constantly against the wall, and it is amazing that they even survive some of the combat scenarios they find themselves in. However, their jobs are never over. Not until they take back Los Angeles and then the world.

For more information on the film and its viral campaign, check out the Battle: Los Angeles Viral Page. Listen to our interview with cast member Neil Brown Jr. here.