The Viral Campaign for “Thor” and “The Avengers” Begins in Chicago

I had the opportunity to attend the Chicago Comic and Entertainment Expo at the massive McCormick Place convention center this past weekend, and while the focus of the three day convention was primarily comic books, the heavy presence by Marvel presented a few movie related surprises. Not only was Thor himself, Chris Hemsworth, the show’s guest of honor, but Marvel and Acura revealed a partnership that just might signal the beginning of a massive viral campaign. Are you ready to join S.H.I.E.L.D.? Hit the jump to find out how.

Adjacent to the Marvel booth on the show floor, the S.H.I.E.L.D. booth prominently featured a souped up Acura, donning side-door logo decals and some impressive firepower. Agents formed a perimeter around the booth throughout the weekend, while Con goers and aspiring agents could submit their email address to the website, JoinShield.com. There were no further details at the booth about what becoming an agent may entail, but according to the site, applicants should check back April 11th, which is likely when the campaign begins. 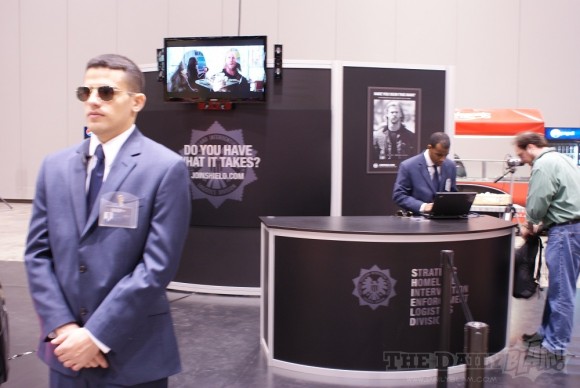 Interestingly, I sat in on the Q & A with Hemsworth, and the final question posed to him was from someone at the S.H.I.E.L.D. booth, who asked him if he was aware that S.H.I.E.L.D. was looking for new agents. Hemsworth appeared perplexed, and replied that he hadn’t, but expressed interest in coming by the booth later to check it out. The crowd roared in applause at the thought of the God of Thunder walking the show floor. It was a cool moment.

I think it’s brilliant that Marvel appears set to launch a viral campaign specifically around S.H.I.E.L.D. Not only does it provide the most logical opportunity for mere mortals like us to become involved in the world of superheroes, but S.H.I.E.L.D. is the common thematic thread running throughout all of their films, and provides the opportunity for a truly comprehensive marketing campaign. We have yet to see a viral campaign run across multiple movies, but Marvel has that opportunity over the next year with their releases of Thor, Captain America, and ultimately, The Avengers. It will be interesting to see how this plays out and what this may mean for fans.

Special thanks to the folks at TheDailyBlam! for snapping some photos of the S.H.I.E.L.D. booth (including the one above), and I’ve also included the one decent photo I took from the Hemsworth Q & A (in the header). Thor opens May 6th, Captain America opens July 22nd, and The Avengers drops on May 4th, 2012.