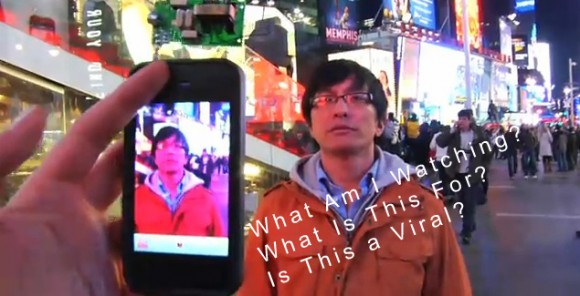 Movie virals have always been a huge part of the film industry since the dawn of its simplest form; the movie trailer. Its only now that virals have become more prevalent to studios since they introduced a more interactive version for fans and moviegoers. There are effective virals, the virals that allow us to experience the movie without even knowing it. Then there are virals that has us think, “what did I just watch?” or “what is this for?” these are the kind of virals have the opposite effect and fails to generate any interest. But it can work if the studios or viral companies do it the right way. But there are examples where they go through that process and as a result the virals that fail to live up to its potential. Hit the jump to read my thoughts on this.

io9 recently posted an article about when the viral lives up to more than the movie itself. The site stated that it was just much more than a video, it had enough of a shock value to make viewers believe that his could be real. But if the video fails to make the connection to what they are promoting, then viewers will not be able to established what they just watched or what the video is advertising. Of course not all virals started out like that. Trailers were the earliest form of virals, and with the internet being the fastest way of information getting out official websites have allowed us to play games or create avatars by morphing pictures of ourselves. Since then evolved into scavenger hunts, calling phone numbers, being able to decipher codes, or solving mathematical equations. The viral campaign has grown a lot since those days of morphing avatars, which is a benefit to both the audience and the movie itself. By allowing audiences and fans to be a part of that movie experience without being on the set lets them feel as though they had a significant role in the film.

The most notable one that audiences may be familiar with is The Dark Knight viral campaign that ran between 2007 until is release date on July 2008. WB had sent audiences on a whirlwind scavenger hunt; from sending them to various pretzel venders within the San Diego Convention center to sending them to bowling alleys to pick up bowling balls and cell phones. The Dark Knight viral was perhaps the most elaborate, extensive, and expensive (both on the studio and the audience looking for the points of interest) virals that WB or for any studio has gone through. 42 Entertainment allowed audiences to vote for the city of Gotham, they received instructions from the Joker, and they got to see the terror of the Joker first hand as he defaced many of websites from the residences of Gotham. And it all paid off as The Dark Knight ended up being one of the most successful films that WB has had.

Since then viral campaigns have gone cold. That or studios just don’t want to spend the money for a large campaign such as The Dark Knight. We here at MovieViral have covered many viral campaigns since our site was launched in 2009. Of course studios have been launching websites that have tied into their movies long before The Dark Knight’s viral campaign. Studios have been launching websites that have tied into their movies, whether that be faux companies or just the official movie website, studios have been creating anything to market their movie. They even have launched ads at bus stations, but the problem is when you call the ad, there is this long prerecorded audio that you listen to and you don’t realize that it is for a movie until the very last moment. This diminishes the movie experience that we want to experience from a viral. But if you are to play devil’s advocate, it does work, but then it asks the question do you want to see the movie after listening to an audio recording?

Limitless is a perfect example of a viral that had the potential to be a great viral, yet it failed to live up to it. First Relativity Media sent out a sample of their “pills” which would allow us to have full use of our brain. Sending out samples was a great idea at first, but no one had any idea what the movie was about, there wasn’t even a trailer that was released. The problem with this is, it is not a movie that is as hyped as a summer blockbuster or a definite cash cow. It is just a movie, and as Limitless’ box office proves, the viral may have done its job by promoting the film, like airing PSAs. But did anyone else know about Thinkmodo’s Times Square video that was released before the film premiered? Probably not. But for those that did watch it, they realized they were watching not a video hack, but an ad for the film. Yes more than a million watched it, but you had to have watched the second video that was released by relativity (which was watched by less than half of those who watched the first one watched it) to actually realize that it was an ad for Limitless

There is also the case of studios unveiling virals at the very last moment. Hanna is a prime example of that. Studios unveil these viral sites, but if you expect the average person to figure out that it is an ad for the film, then you lose sight of what a viral really is. So it will be hard to tell if the viral did work for Hanna until we get its box office results on Sunday.

Another viral that I could think of that was a decent viral and you knew it wat it was advertising but the movie itself failed at the box office was Let Me In. The Let Me In viral used pages from the same playbook as most virals, using games like riddles and puzzles to reveal new images, but it connected to the actual movie. We knew what was being advertised.

As I have said unbranded marketing virals can work, given the right promoting and for the right film. Sure you can give a viral to films that are not as highly anticipated as other films, but I think the studios should start promoting their film early enough to generate interest, then build the viral around it. Whether that be at a movie convention or its simplest form, the teaser trailer. But if fans or the average moviegoer cannot make that distinction that the viral and the movie are connected, studios are risking losing the business they need. For unbranded marketing to work, studios need to have that type of promoting done in head of time. But rather than take that gamble, studios should just tie in sites subtly into their trailers, create something similar to Rocket Poppeteers, or have some form of familiarity that would allow us to immerse ourselves into the film outside of being on the actual set. All movies deserve a great viral, but for there to be a great viral, there needs to be a understanding of how virals work. 42 Entertainment has this understanding, but Thinkmodo likes to think that the average person are clever enough to figure this out by going about it in reverse. This is a novel idea and an idea that could work, but then again not all ideas are great and while the average person is smart, some might not be able to make those connections. One can only hope studios or companies figure out an effective way to have unbranded makerting reach out to audiences without having them to think so hard.