Become an Agent of S.H.I.E.L.D. at JoinSHIELD.com

Last March we reported that a viral campaign for Thor and The Avengers was being launched. JoinShield.com made its viral debut at the C2E2, a comic and entertainment event regularly held in Chicago. There attendees were able to submit their e-mail addresses and “become” agents of S.H.I.E.L.D. Details were sketchy back then, but now the official website has been launched and you can check it right after the jump.

Upon opening the website you will be able to login as a new or returning recruit, although it doesn’t seem to matter if you are either. Once your login, the site allows you to connect to your facebook profile and after you adjust your profile photo you will be officially initiated as an agent of S.H.I.E.L.D. After you sit through a quick montage of photos featuring quick clips of Iron Monger and Abomination (enemies of Iron Man and the Hulk), the site then introduces us to the specially modified weapons that the agents use as well as the modified Acura cars you will be using as means of travel. It should be noted that Acura is the marketing partner for this viral marketing campaign. The website interface bares an exact resemblance to that of the interfaces we saw towards the end of Iron Man 2, with the maps laying outing the locations of the members of The Avengers. 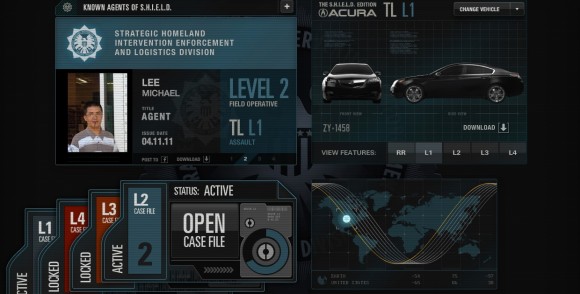 Now that you are a rookie agent of S.H.I.E.L.D. you are assigned four missions or tasks to complete in order to gain a higher ranking as an agent. Of course completing each task will not only give you a higher rank, but you will also gain access to more classified images, videos, and documents, and more tasks to complete. Your first task is to locate the exact location of the energy pulse and for you to proceed to the next level you will have to complete this task. Its not do difficult just point the crosshairs anywhere on the map. Each image you take will have an energy meter and a disturbance direction. If the meter is low just point the crosshairs towards where the disturbance direction is pointing. Also after completing each task, Acura will pop an ad up for their latest model car, modified for any agent of S.H.I.E.L.D. of course you can exit out of the ad at any time.

Your second assignment will have you test your avoidance skills try and avoid four energy interferences for 30 seconds. These interferences bounce around, so watch out, it could be tricky, but luckily the balls follow the same pattern, so take as many tries as you want.

When you have completed your second task, the third one will require you to rotate a set of locks to secure the correct combination. Be sure to look at all the locks and you turn one lock, another turns and unlocks itself. 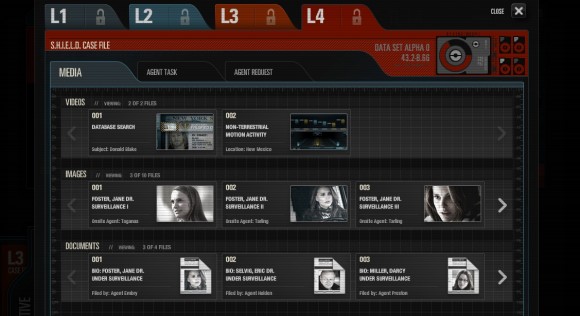 Finally when you have completed that task you will be tested on your lie detecting skills. The site gives you all the indicators of what can be determined as a lie. It’s a 50/50 chance of getting the answer correct, so if you don’t get it right the first time, you always have a second chance.

Overall, the viral site is a fun game with a few Acura sweepstakes tied into it. Unfortunately it is the Acura sweepstakes that makes this viral feel more like an ad for the car company. The site offers no new footage of Thor , as the clips they have included have been taken from trailers and already released clips, and the documents and images do not provide any new information for Thor or for The Avengers. Still this viral does have the potential to lead up to The Avengers, but we will have to just wait and see if it does.