Marvel Launches Interactive Guide to the Universe of Thor

Marvel’s Thor is just a few weeks from opening in theaters, and while many of us movie fans may be interested in seeing it, we may not all know much about the title character and his world. Marvel UK hopes to fix that with their “Interactive Guide to the Universe of Thor”. Get the details after the break.

In the film, Thor (Chris Hemsworth) is the heir to the throne of the Realm of Asgard, but is banished to Earth by his father Odin (Anthony Hopkins) for being a hot-headed fool. Here on Earth, his god-like powers only exist if he has possession of the Mjolnir, a war hammer. 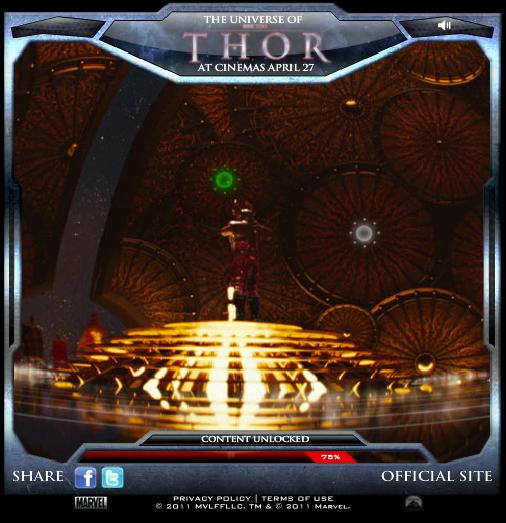 The guide on the Marvel website features the military base camp set up around the hammer, which fell to earth in a different location (and presumably earlier) than Thor. By clicking on different locations, you can learn about various aspects of the film, including S.H.I.E.L.D., Jane Foster (Natalie Portman), Thor himself, and the world of Asgard. There are video clips, production stills, and even downloadable wallpapers for you to enjoy.

Once you view all available content, you then have access to new content, and once you get to 100%, you get an easter egg image. While I have no idea what significance the image has to the film or comic, I won’t spoil it by embedding it here. Check out all the content for yourself and let us know what you think!

Thor, directed by Kenneth Branagh, opens in theaters in the US on May 6th.