This Earth Day (April 22nd) will mark the third annual US release from Disneynature, a Walt Disney film label that produces exclusively nature documentaries. 2009 saw Earth, last year we got Oceans, and this Friday African Cats hits theaters. We’ve already told you about how getting involved and purchasing tickets can help the animals featured in the film and those like them, but even then, is it worth your money? Find out in my full review after the break.

Both of Disneynature’s previous endeavors were critical successes, and you may have seen that this year tends to be following the same tradition. African Cats tells the tale of two feline families in the Savannah using real footage. Two separate lion prides dominate their sides of a river in the
Maasai Mara National Reserve until finally the aggressive all-male pride invades and takes over the other, female heavy, pride. In the same area, a mother cheetah, Sita, raises her cubs in a tough environment with many predators, including the lions we’ve grown to know. 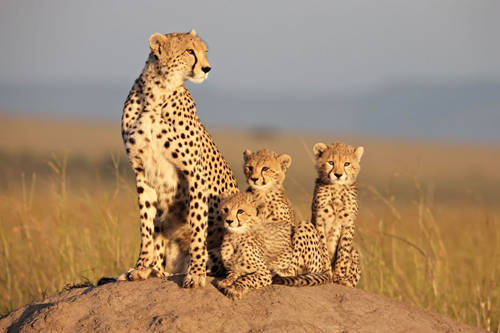 I found the stories of both families to be captivating and their actions and behaviors startlingly similar to humans. We look at lions as being royal beasts, and they show themselves to be just that, with their conquering of land and ferociousness. Sita proves that female cheetahs are better mothers than all those “Teen Moms” put together. You go through quite the range of emotions, as characters we follow enchant us, impress us, surprise us, and sometimes break our hearts when they tragically die.

My one main criticism with African Cats, unfortunately, is the narration by Samuel L. Jackson. I love Jackson as an actor, but he does not make a great narrator. He doesn’t exude the intelligence of a David Attenborough or Morgan Freeman, and he doesn’t nail down the empathetic storyteller of an Oprah Winfrey or hell, Morgan Freeman. I understand that Disney was looking for someone with some energy in their voice, but Jackson just feels out of his element trying to fulfill a range of emotions, from jubilation to somber. I don’t think the sometimes simplistic dialogue helped him much either.

Overall, Samuel L. Jackson’s narration can be overlooked for a fascinating story about majestic creatures in the wild. The cute factor of the cheetah cubs alone is worth your time this Earth Day.