Machinima.com has been expanding beyond simple machinima (a film style that uses virtual interactive environment assets for animated films) lately, and more on to fully animated shorts. The guys at How It Should Have Ended are already working with them to re-create video game endings, and now they’re going to be working on a complete Halo series. Check out the pictures and a video, but be forewarned, they might not be as grand as the Halo shorts you’ve seen.

Stills were taken by Nikki Bruckner and Sue Corbett: 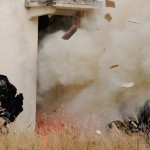 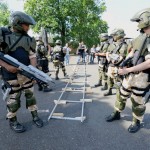 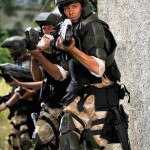 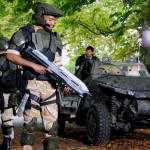 The last one is my favorite still, mainly because it has a half mongoose/half warthog hybrid in the back, which makes this film take place after Halo: Combat Evolved.

The images can be seen on Machinima’s Facebook page, and GeekTyrant.com got word that more is to come on Monday, and indeed there was.

Now I hate to be the bearer of realism, but this is obviously not a big-budget Halo film you want or expecting. It’s more like a Halo series with a moderate budget. I’m not going to pre-judge a movie’s quality with stills and a behind the scenes video because it can easily be fixed with special effects for the final product. Stay tuned for more, because Operation Chastity has been in the making for 3 years. Something good is bound to come out of that. What I can assure you is this: These marines won’t live. They never do.