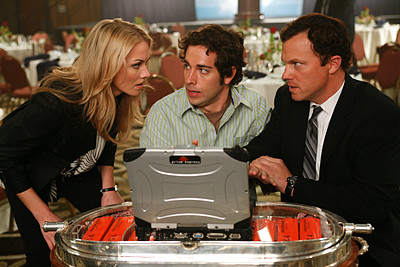 When fans realized that their favorite televised series was on the brink of being cancelled, they came to the conclusion that they must flood the network that broadcasted the show with near to infinite amounts of letters persuading them to save the show or extend it for one more season. Now that the generation has evolved thanks to the internet, fans can go directly to the source via e-mail, texting, and twitter. Chuck fans hope to save their beloved show with the use of the Internet. To find out what Chuck fans are tweeting hit the jump.

Last week marked the birth of the twitter campaign to save the NBC show Chuck. The fan site We Give a Chuck is aimed to let the show’s advertisers know, well, that they exist. Using the hashtag #NotaNielsenFamily, the fandom banded together in hopes of letting Chuck‘s many advertisers that the oft-criticized Nielsen ratings system doesn’t speak to what they claim the true numbers the show is really pulling in.

The campaign started last Monday and will presumably continue on until the season finale. Fans will tweet to advertisers during the show in hopes of getting their attention. For example @Tide just saw your ad on @NBC’s #Chuck. Thx! You support Chuck, I’ll support you PS-I use the to-go stick all the time! #NotANielsenFamily”.

In some cases the networks listened to the fans and saved the show. Fans were able extend Jericho for a second season by mailing large amounts of peanuts to CBS. On the other hand, some networks will not listen to fans. ABC did not extend FlashForward for a second season, despite the fact that fans staged blackouts across Los Angeles.

Luckily Chuck fans won’t have to resort to such “drastic” measures thanks in part to the Internet and if they are lucky enough, they may be able to crash the site by using only 140 characters. Hey if you were a fan of a show, wouldn’t you do anything to save it?