Jack Sparrow has always had some sort of affect on the female population. Whether it is his charm, dashing good looks, or his way with words, the infamous pirate from the Pirates of the Caribbean franchise will set sail once again on May 20th. But fans might not have to wait that long to get in on some of the pirate action or even screen the film. Hit the jump to find out how Hot Topic is catering to the pirate fans.

Hot Topic has been known to cater to the fan geek in all of us. They regularly hold signings for some action or huge fan base films, hand out some screenings to films, and of course provide some of the best geek merchandise and this upcoming weekend is no different. So to celebrate the upcoming release of the fourth Pirates of the Caribbean Hot Topic will have. Pirates Day” fan events, fun-filled celebrations of all things “Pirates,” which will include advance 3D fan screenings of the film. The events will take place on Saturday, May 14, 2011, in and around the Hot Topic stores in Hollywood, Calif., and Paramus, N.J. 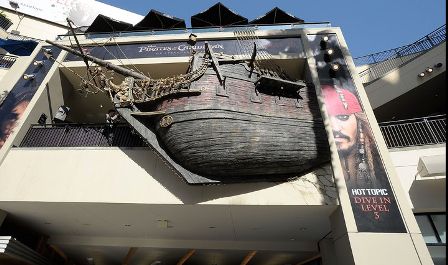 The Hollywood event, held in and around Hot Topic’s flagship store at the Hollywood & Highland complex, showcases a newly launched “Pirates”-themed experience, including the hull of a pirate ship seemingly crashing into the main courtyard. Starting at 4 p.m., fans of all ages will enjoy an exciting afternoon, featuring live pirates performers, toy demo stations, trivia giveaways, special photo opportunities and a chance to see real props and costumes used in the film. Fans are encouraged to come early and dressed in their best “Pirates” costumes for a chance to win incredible prizes in the Ultimate Fan Contest and have an opportunity to secure VIP seating at the “Pirates of the Caribbean: On Stranger Tides” advance fan screening, presented in RealD 3D at the El Capitan Theatre.

The East Coast fan event will be held at Garden State Plaza in Paramus, N.J. The fun and games start at 1 p.m. and as with the West Coast event, fans will enjoy interactive entertainment, giveaways and photo opportunities, plus the chance to see a giant ship-in-a-bottle statement installation adjacent to the Hot Topic store. Similarly, those who come early and dressed as pirates have a chance to win amazing treasure and a VIP seat for the screening, presented in IMAX® 3D.

While there won’t be any signings, the other festivities are sure to be of some interest. Especially the fact that there will be people dressed as pirates.