ABC’s “Castle” To Get Graphic Novel

Disney’s aquisition of Marvel keeps looking better and better, as yet another crossover will bring fans of the hit ABC show Castle a graphic novel to be published by the comic book company. However, it may not be exactly what you think. Get the details after the break.

TV Guide reports that “Marvel Entertainment and ABC Studios have teamed up to create a hardcover graphic novel inspired by the ABC’s Castle”. However, it won’t follow writer Richard Castle (Nathan Fillion) as he shadows NYPD detective Kate Beckett (Stana Katic), nor will it follow Nikki Heat, Castle’s novel character inspired by Beckett. The graphic novel will instead follow the character that made Castle famous, Derrick Storm. On the television show, Castle becomes bored with Storm, the title character of his series of detective novels, so he kills him off, leading him to use Beckett as his muse for the new character Nikki Heat.

Both on the show and real life, two novels have been published (through Hyperion Books) featuring the Heat character, but this will be the first time we actually get a glimpse at Storm. The 112 page graphic novel is titled Richard Castle’s Deadly Storm, and features Marvel writers and illustrators. The cover art, by Planet Hulk‘s Carlo Pagulayan, can be seen below. 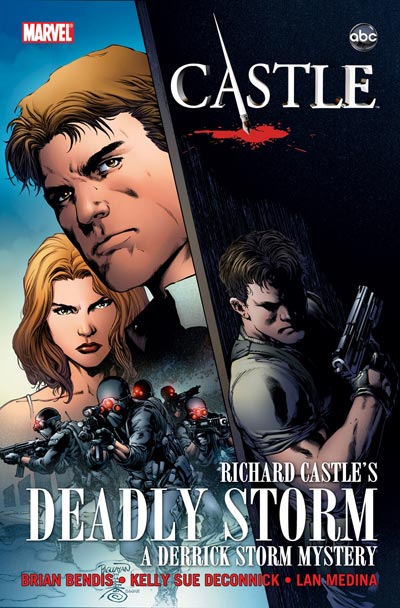 ABC has been really worked hard to get the Castle brand out there, between social media storytelling, novels, and just the overall presence of Richard Castle online (you can find the character on Twitter, Facebook, and his own homepage). Will you buy the graphic novel when it comes out in September?