Movie Review: “Pirates of the Caribbean: On Stranger Tides” Lives Up To Its Subtitle

Editor’s Note: This article was originally published on Sunday, May 15th

With his charm and dashing good looks Johnny Depp has created a character that should go down in history for the pirate genre, and after two films that focused heavily on Will Turner and Elizabeth Swann we can finally come back to the character we all know and love. But Pirates of the Caribbean: On Stranger Tides can get a bit convoluted and gets confused on whether or not to focus on the character that brought the Pirates franchise to where it is today. Hit the jump to read the full review.

If there was ever a time that the Pirates of the Caribbean film franchise needed to be revamped it was now. There was too much focus on Jack trying to run way from his contract of servitude with Davy Jones, the love triangle that was ensued by Sparrow, Turner and Swan, and there were just way too many characters to focus on that you were beginning to forget who was sided with who and the fact that the character was there in the first place. In fact On Stranger Tides looks miniscule when scaled with the previous two Pirate films. While it tries to be a film that can stand on its own to legs and separate itself from the rest of the entries, On Stranger Tides cannot get passed its themes that were prevalent in the previous three entries of the franchise and subtly embraces them, virtually turning it into an unnecessary epilogue. 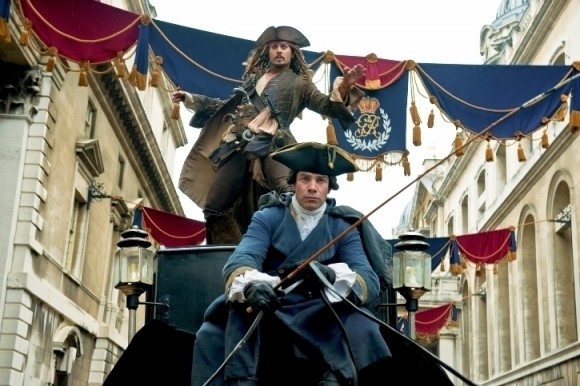 On Stranger Tides has Jack Sparrow setting sail with the beautiful and ever so cunning pirate Angelica (Penelope Cruz). She is the only pirate who is able to match blades and wits with the world’s most infamous pirate. Of course her sudden appearance causes Sparrow to question her motives. While both of them are on a quest to look for the fabled Fountain of Youth, Jack wonders if she is really willing to share the powers that fountain brings, or is there an ulterior motive. Not too far behind are the British Royal Navy and the Spainish Armada (who seems to have no real part but be included in the international race towards the fountain), who are also in the search for the fountain of youth and have their own agendas when they get to their destination. But when Angelica forces his hand, Jack is brought aboard the Queen Anne’s Revenge where his failed mutiny causes Captain Blackbeard to come out of his quarters and reveal his plan to him.

Throughout these four Pirates films there are three common motifs that is undeniably hard not to acknowledge: immortality, daddy issues, and shifting allegiances. The former two are a bit subtler, but it is the latter that will still perplex audiences throughout the entire film. The idea of immortality is indeed a focal point, but as Jack said, “it is not so much the destination as it is the journey.” Despite how our characters finally reach that x marks the spot on the map, Marshall’s pacing is incredibly awful and tests the limits of his audience’s stamina and eyestrain. It becomes a grueling two hours and 17 minutes of sitting through disastrous compilation of choppy and filler scenes. Added with the 3D effects during some of the cinematic battles and you will lose you place entirely.

The wild antics that we all know and come to expect from Jack are there, but the film loses its focus on Jack and makes him look passive an completely uninterested with what is going on. Yes he does involve himself in some of the more climatic scenes, but we do not get to see enough of what makes Jack so special, which is his ability to improvise. We get a glimpse of what is his whimsical meticulous planning but those scene are just too few and far in between and filled with either unnecessary scenes of Jack just standing around during all of the action scenes or filler dialogue scenes. Despite Jack being rather passive during all of the physical tension, it is his chemistry with Penelope Cruz that can be considered the one enjoyable things to watch. 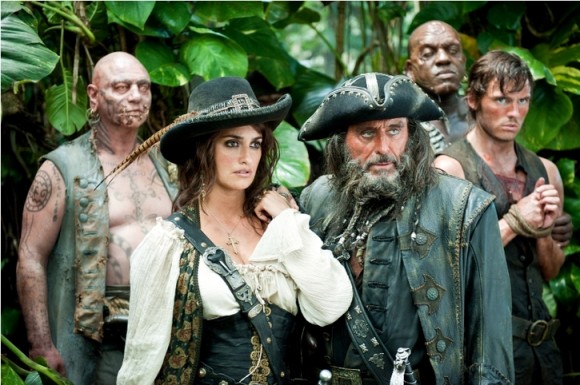 Cruz’s appearance (and her chest makes a few appearances as well) as the new female lead is an exciting new addition to the film franchise and is what the Pirates franchise needed to make On Stranger Tides feel a bit fresher. The fact that she is Jack’s equal in almost every way is exciting to watch. The two are always trying to come out as the victor whenever they share scenes together, whether its dueling with swords, dancing or just conversing, there is no telling which will come out as the victor. Whenever the two are bantering they seem to be doing so effortlessly and without making sound scripted. We’ve have seen Jack be able to do this in three films, but to see it with a new face is a refreshing take on a character we have seen in three films.

Of course no Pirate film complete with its daddy issues and one would think that Ian McShane playing as Angelica’s father and Blackbeard would strike fear into those who are watching the film. McShane doesn’t seem to be able to channel his grittiness of Blackbeard and does nothing to enhance to elevate the level of villainy that we saw in Tom Hollander, Bill Nighy, or even Geoffrey Rush. In fact the film tries too hard to make Blackbeard look like a villain by having him move the hilt of his sword to control the ship and bring his sailors to their knees, conjuring zombies, and having declare himself as “a very bad man” in every other scene. None of it helps establish a menacing presence that you could come to expect from a pirate.

Out of the new cast, I didn’t particularly care for the additions of Spanish-French actress Àstrid Bergès-Frisbey playing as a mermaid named Syerna and the English Sam Caflin who plays as Philip Swift, a stalwart missionary. While Syerna may play as a vital role in the film, Philip seems to have no importance at all. He fills the romantic void and is a transitional character so that fans can move on and forget Will Turner and take a liking to Philip. But perhaps its because that Philip is suppose to be the new Will Turner that we start to think if the essence of character left at all. The two begin to consummate a relationship that seems to be deprived of any emotion and looks as though it is doomed to fail. The dialogue that the two share could be compared to that of a low budget primary school version of Romeo and Juliet or two bobbleheads talking to each other. 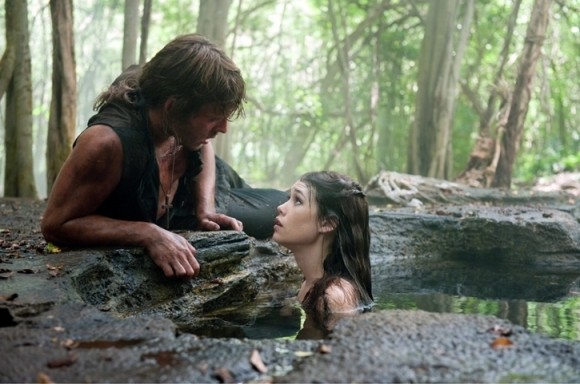 Of course since this is a full review, one cannot forget the 3D aspect of the On Stranger Tides. Unfortunately, like most 3D films, the scenes that were shot in the dark will strain your eyes and make you feel as though you were watching the entire film with a thin black veil over your face. A good fifteen minutes of the film that were shot in the dark have no light to feed off of and as a result your are forced to squint and adjust to the light that is given to you. I found myself taking off the glasses at some points in the film and just convinced myself that I had double vision during those scenes. Marshall attempts to mask his mistakes by strategically placing the 3D cameras everywhere. From ship decks and courtyards to shores and beach coves, anything that had depth to it Marshall shot it, but the action sequences suffer as a result of Marshall scene selection and you are forced to look for where the action is.

It’s amazing that after shows like LOST (which ironically comes from ABC studios which is owned by Disney) that you would think that they would take advantage of Hawaii’s beautiful and vast nature. Alas, Marshall turns his attention to dense jungles and waste deep rivers rather than on some of the open plains and horizon of the islands. 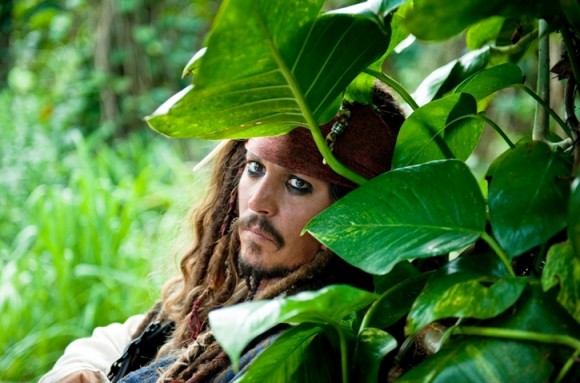 But audiences should enjoy some of the major action sequences that does sparkle. A few minutes into the first act has Jack involved in a whimsical escape that only a person like Jack can do, and bumping into a few interesting characters along the way (its a super cool cameo of which I cannot spoil). The failed mutiny defies all the laws of physics, but the hocus pocus properties that are derived from Blackbeard’s mystic sword seems to explain how he regains command of the ship. Maybe it was Marshall’s decision to shoot some of the scenes in more than one take that makes the other action scenes staged. These action sequences don’t seem to be carried out in a fluid motion and its choppy editing makes it seem as though Marshall asked for two seconds of sword fighting, then cut, and moved the entire cast to a different side of the set and continued the scene from there.

But some good actions and decent chemistry does not make a good film overall. Again the film falls victim to its own sins and manages to jam pack itself with so many unneeded plots. Philips unyielding desire to redeem all the wrongs that transpired before him while aboard the Blackbeard’s ship becomes tiresome and it stretches out through the entire film. Captain Hector Barbossa (Geoffrey Rush) seeks revenge on Blackbeard for taking Jack’s beloved Black Pearl by acting as a privateer for the British Royal Navy. The inclusion of Barbossa was unwarranted and feels as though it was to reference the previous Pirate films, the way all of the Pirate films gives a friendly nod to the ride (oh that is in there too). Then you add the romantic subplot that was mentioned earlier and you begin to forget what the actual film is about. 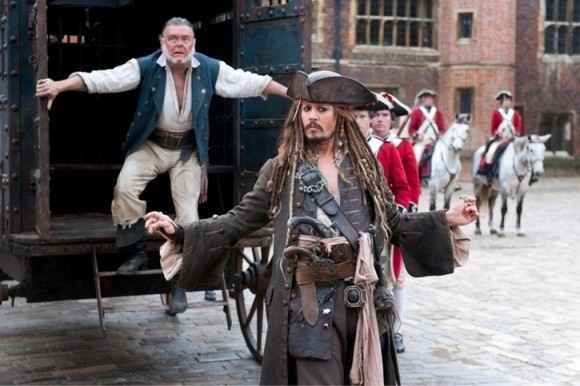 On Stranger Tides is true to its name. It’s rather strange how all of this came together but still makes for a rather enjoyable watch. Editor Michael Kahn has our pirates look as though as they were scrambling to get to their destination rather than charge through it. Yet its one redeeming quality is that when we get to see Jack share the spotlight with one and only one person. It is difficult to build a movie around one character, but when your one character is the one fans want to see and is supposed to be the lead character, maybe you shouldn’t surround him with so many supporting characters and have him involved in so many subplots. That or Marshall isn’t the kind of director you hire to revamp your films. But it is that familiarity of Depp as our favorite pirate trickster and themes taken from the previous Pirates films that will have audiences sit comfortably in their chairs and have the mistakes of Marshall go over their head.