In the Super 8 ARG, the Revalistic website has played host to conversations between our main character Josh Minker and Sarah, a friend of Josh that actually works for someone who is after something that belonged to Josh’s father. On the site, Josh reveals that he found an unknown machine, and it looks like someone has caught on.

Sarah is Josh’s supervisor at work, and based on some of his blog posts, he may have been developing feelings for her before all this stuff came. However, now Josh is in the middle of a big conspiracy surrounding items his dad (Dr. Woodward in the film) had from his days as a scientist studying the alien that is featured in the film. We find out that Sarah actually runs a conspiracy website (Revalistic“>Revalistic), and that she has been looking for the “vitas relic”, which seems to be the centerpiece item to this mystery.

Though her methods and motives are questionable, she attempted to gain Josh’s trust shortly before Mysterio was killed. Josh had been working with him to figure all of this out, but the OTHER people looking for the vitas relic (who are supposedly not affiliated with Sarah) killed him, so now Josh is relying on Sarah to help him get answers.

Using the password BXTSLWK729 (previously discovered), we are able to see the chat between Josh and Sarah on ARG, the Revalistic.com/Explanation. After Sarah tells Josh of Mysterio’s death, he doesn’t talk for awhile, so she posts on the site to show her concern.

If you’re able to check this, wanted to let you know that I’m safe. I’ve been careful, like we talked about. But I haven’t heard from you since last week and I’m starting to get worried now. If you can find a way to let me know you’re OK please do so.

I know you’re still beating yourself up over it but you didn’t get that man killed. It’s not your fault. Just remember that I’m here for you. You’re not doing this alone.

Josh responded several day later, but his absence was not due to grieving. He had been looking for something.

Sorry I worried you, I didn’t mean to. This one was harder to find than the others – it was buried in Scott Hollow Cave. I hate caves and it was well-hidden, like no one had been down there for centuries. This must be the other piece my dad was talking about. I’m trying to find a way to charge it but nothing yet. No note from him either but, weirdly, I just noticed four more coordinates on my map. In Ohio of all places. They seem to be tied to different days, like whatever they’re marking is constantly moving. Could it finally be my dad? I don’t know if I’m ready for this but I guess I’ve come this far… 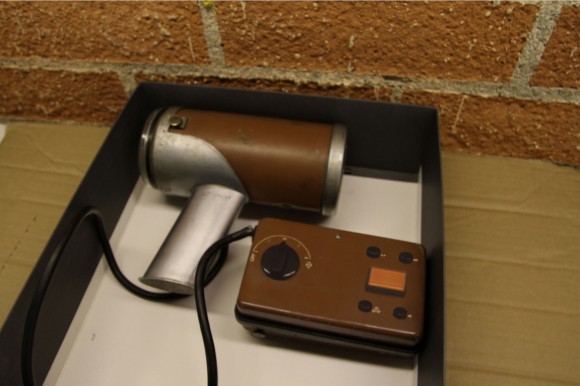 I haven’t seen anything that explains why Josh even went to Scott Hollow Cave, which is in Monroe County, WV, so if you remember something, let us know. The site is a good 160 miles from the Ohio border, so it’s an interesting choice to stash this old school hair dryer. Actually, the device looks like the one used in testing the alien cubes in Clip 69 at S8 Editing Room, a site that is piecing together a film reel that documents the research done on the alien and its technology.

Josh mentions his map (presumably the one seen partly here and here) having four coordinates in Ohio, which is where the alien escaped. The map we see briefly in the series of promo clips this week (which is also the one in Portal 2) has four dots in Ohio, so his map must be a copy of that train schedule. Here is what the map looks like, thanks to Super 8 News. 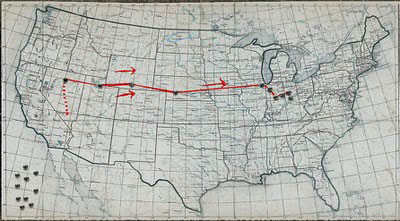 This map, along with Josh’s mention of Ohio, are also important because of the next entry on the Revalistic site.

You won’t see her again unless you meet me at the southwestern Ohio coordinates now. Bring everything. If anyone follows you, she’s gone.

Someone has caught on to Josh and Sarah’s secret communication tool, and they have kidnapped Sarah in hopes of getting all the items and clues Josh has amassed. Who are these shady people? The government? A private entity looking to make some money? We’ll have to wait and see, but let us know in the comments below if you find any clues.

Super 8 opens in theaters and IMAX on June 10th. For all our coverage, check out the Super 8 Hub.