“Green Lantern” Gets ‘Got Milk?’ Ad, Viral Site, And More

Remember when we were all worried that Green Lantern would not have much of a marketing push due to difficulties with its special effects? It seems that in the weeks since Warner Bros.  tempered marketing expectations, fans have faced a barraged of trailers, television spots, viral websites, and much more. This week saw the release of two more viral websites, with one tied to the long running Got Milk? advertising campaign. Hit the jump to see how more calcium will make you Lantern worthy.

Lanternworthy.com went live in conjunction with the release of the Green Lantern Got Milk? advertisement (seen below). The site offers a series of games to determine if you are fit to join the Green Lantern Corps.  Michael Clarke Duncan narrates as Kilowog as he guides you through tests that measure your agility, strength, and focus. The games are good timewasters, but it’s arguably most fun to have an extended listen to Clarke Duncan’s Kilowog, particularly when he describes the health benefits of chocolate milk. In addition, I also wonder if the music playing in the background is our first taste of the film’s score, which IMDB says is composed by the great James Newton Howard. 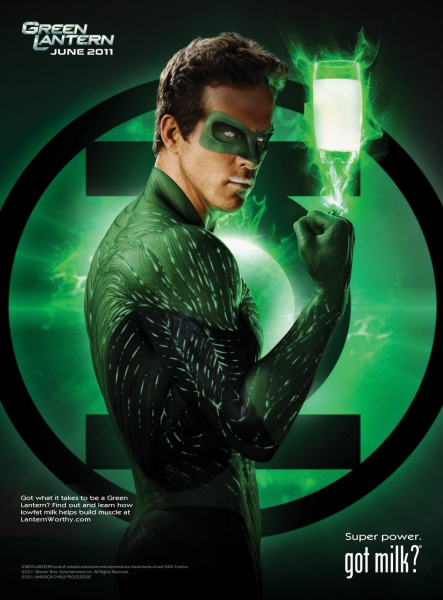 Warner Bros. also posted another viral site that allows users to create their own Green Lanterns. One can customize their lantern by choosing between an equally weird array of arms, legs, wings, and other body parts. Once finished, they can be shared with friends on Facebook or downloaded to one’s desktop.

After all is said and done, I am interested to know how Green Lantern’s actual marketing compared to Warner Bros.’ initial plans before they recognized their visual effects shortcomings. Are we seeing the marketing push they always envisioned?  Or did they have to table a larger, possibly more immersive campaign? Regardless, I have been pleased with the viral websites and television spots that have come out in recent weeks, and I am ready for the movie.