Super 8 Review: You Nostalgia You Lose

This weekend, a film called Super 8 opens in theaters and IMAX. If you’ve followed our website at all, then you know that we’ve been covering the viral campaign extensively for the J.J. Abrams written and directed sci-fi film. Now the time has come to see if the movie lives up to the impressive ARG. Read our spoiler-free review after the break.

Paramount Pictures and Bad Robot bring us Super 8, a film from producer Steven Spielberg that attempts to combine the best of what we love about classic Spielberg sci-fi adventures and J.J. Abrams’ modern storytelling techniques. It’s 1979 in the small town of Lillian, Ohio, and Deputy Jackson Lamb (Kyle Chandler), along with son Joe Lamb (Joel Courtney), is dealing with the sudden loss of his wife, Joe’s mother. Despite his father’s wish for him to lead a more normal childhood instead of building models and painting, Joe helps his friends make a zombie movie for a film festival. When the kids shoot a scene at the train station without permission, middle school biology teacher Dr. Woodward crashes his truck into an oncoming train, unleashing a monster on the peaceful town, and it’s all caught on film.

Nostalgia – Super 8 blends together the aforementioned film styles of Spielberg and Abrams perfectly. The movie harkens back to the likes of E.T., Close Encounters of the Third Kind, and even Goonies. If Spielberg had modern computer graphics and a sense of tighter editing back in the 70s and 80s, and I’m pretty sure he would have made something like Super 8.

Warmth – Most movies these days try to be cool. This movie has warmth. There’s more genuine heart in Super 8 than a month’s full of summer films, and it’s not just the parent-child relationships either (not going to spoil anything for you).

Acting – Specifically, the child acting. Kids in movies can be hit or miss, as some (i.e. the kids in Jurassic Park) can be annoying. When a group of kids star in your film, it becomes a lottery. Fortunately, all the young actors in Super 8 are amazing, which helps add to the Goonies vibe mentioned earlier. I argue that Elle Fanning, who plays Joe’s love interest Alice Dainard, is a better actor than her sister Dakota, and all of Joe’s friends play their roles perfectly. I especially enjoyed Ryan Lee as pyromaniac Cary. 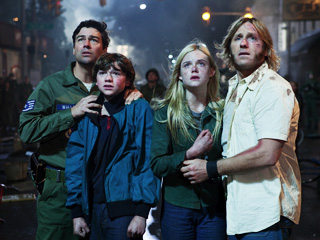 Nostalgia – Sometimes it was a bit too much. We get it, you’re a Spielberg fan, Abrams. For non-movie geeks, I don’t think this is too much of an issue, as you probably don’t have vivid memories of Spielberg’s movies like I do. Also, Abrams’ love of lens flare is interrupts the mood a few times, so the meshing of filmmaking styles isn’t perfect.

Relationships – The relationship between Joe and his father is the core of the movie, and while I thought the climax of their story arc was strong, the beginning of their problems was a bit vague. It’s implied early on that there’s already some kind of issue with their relationship and that the mother dying just exasperated it, but it’s never fully explained.

The Monster – Obviously I don’t want to spoil anything about how the monster looks or what it’s trying to do. In fact, the plot with the monster and how it goes about its task is well put together. All I will say is that if Abrams keeps making movies with big monsters in them, he has to get more original.

Honestly, all my “bad” topics are just nitpicking. Super 8 is a film that shows how summer blockbusters should be. It’s a impressive mash-up of genres, as it has genuine scares, great humor, and beautiful, if simple, relationship-centric storytelling.

P.S. Both Rocket Poppeteers and Slusho make very quick appearances in the film, so keep an eye out!