Wrigley’s Gum Needs Your Help To Hunt The Red Skull

While the marketing campaigns for Thor and X-Men: First Class have subsided with the release of the films, Marvel’s summer movie season is far from over. With Captain America: The First Avenger due out July 22nd, there has certainly been an increase in television spots, but look for more product tie-ins and promotional campaigns to emerge in the coming weeks. One such campaign is Marvel and Wrigley’s “Hunt for the Red Skull” game. Hit the jump for details on how chewing gum can bring you closer to catching the Red Skull … and $100,000.

At CaptainAmericaQuest.com, visitors are treated to a map of Eastern Europe with little Hydra logos scattered across the different countries. As one moves the viewfinder over a logo, it enlarges, and clicking it will open a box to put in your “code,” found under the caps of qualifying Wrigley’s products. Doing so should not only present you with some images from the film (which TheDailyBlam! seems to have uncovered) but will also qualify you for a number of prizes, the grandest being $100,000. 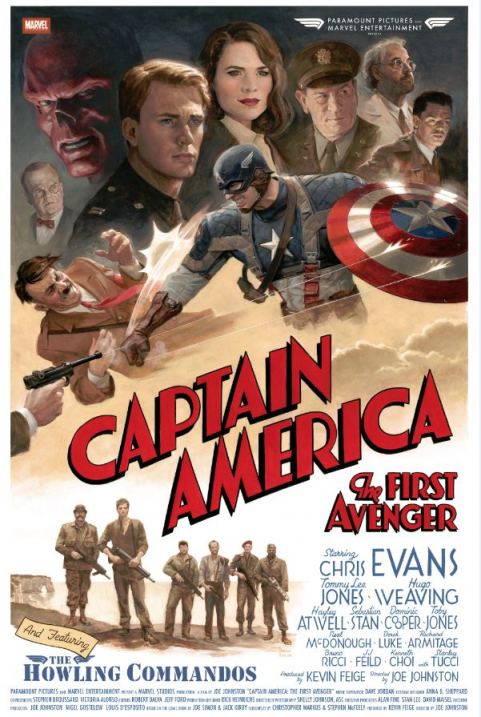 If chewing gum is not your style, or if you are just feeling nostalgic and patriotic, check out this World War II era poster for the film (above).  Drawn by Marvel artist Paolo Rivera, the poster evokes imagery from Marvel’s very first Captain America comic. While I would have already made room in my house for such art if it could be bought, unfortunately, only 100 copies of the poster were printed. A few were handed out at this past weekend’s Hero Complex Film Festival in Los Angeles, and the rest were given to cast and crew for the film. Oh well, I guess if anyone deserves to own this really cool poster, it’s them.