Roger Ebert, a famed film critic for the Chicago Sun-Times since 1967, has been known in the past for his (at times) harsh reviews, television shows and more recently his battle with Thyroid Cancer which has left him unable to speak. In 1996, Ebert began compiling a list of what he felt were the most important films of all time. The list and the accompanying reviews has includes over 300 movies. Roger Ebert’s Great Movies is now available as an app on iOS devices. Read on for more.

The app can be purchased in the Apple App Store for $0.99 and added to all of your iOS mobile devices, though it is not optimized for the larger screen of the iPad. The app includes all of the aforementioned over 300 movies and reviews with stills from the film. All of the films on the list have a link so that they can be added to your Netflix queue or your shopping cart on Amazon. 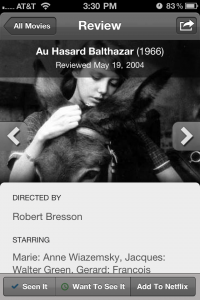 You can also create lists of your own of films that you want to see and those you have seen. The app also allows you to share reviews with Facebook and Twitter and via e-mail.

Will you download the app? Let us know in the comments!