As you know we’ve been covering a new viral campaign from 42 Entertainment, the genius marketing firm behind great ARGs such as Flynn Lives and Why So Serious. There has been a lot of speculation as to what The Human Preservation Project could possibly be viral for, with 5 Gum, video games, and The Dark Knight Rises in the running. After laying low, the viral has become active again. Today I received a mysterious package from the preservation project and its contents were just as mystifying. I can tell you now that this has nothing to do with gum.

The completely black mailer, except for the mailing label (which was white), arrived from Pasadena, California. I was expecting an I.D. badge like the one you created when you first signed up at “Test Subjects Needed“. Instead I got something completely unexpected: a small device which looks like a tracking diode. 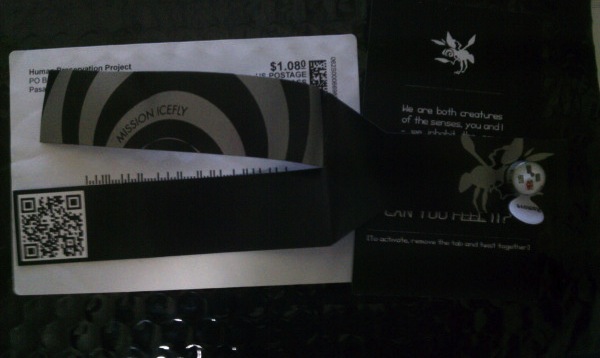 A message was included which you can read below: 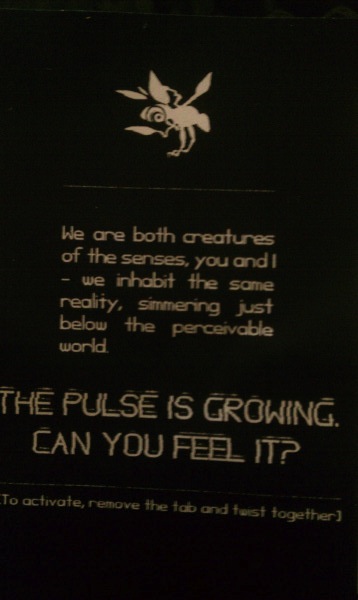 Following the instructions in the fine print, I removed the battery tab and twisted the diode. It began to flash a bright blue. As you can see in the image above, the diode is attached to a Y-shaped ribbon that acts as a helicopter. There is a QR-code on the helicopter that leads to a countdown for “Mission Icefly“.

The wasp that is on the note and under the diode also appears on the countdown site. When you roll your mouse over it, the wasp darts away to another part of the page. The box underneath “Test Subjects Needed” links to the Mission Icefly YouTube channel, where a video is posted showing a bunch of these devices dropping from a night sky lit up by blue lights at the Bonnaroo Music Festival. The night sky is lit up by blue lights.

The countdown runs out on June 30th. Until then you can continue to sign up for The Human Preservation Project at the “Test Subjects Needed” website. Do you still think this is a campaign for a new flavor of gum? Wrigley’s 5Gum was a sponsor at Coachella, another music festival. Have you received a package from the project? Let us know in the comments!