Transformers: Dark of the Moon is definitely an improvement from its predecessor Transformers: Revenge of the Fallen. However, I say that with if there was something smaller than a grain of salt. That improvement although miniscule is an improvement, and the only reason why it is such an improvement is because of its 3D effects. Otherwise this movie is a very poor product and a shiny reflection of what director Michael Bay is capable of, which are big explosions, lame forced jokes, and no story. But what else can you expect from Bay? Hit the jump to read my full review.

At first I thought to myself, maybe Bay has learned his lesson from the Revenge of the Fallen. I mean it was a bad script written during the writer’s strike, so that meant it would be rushed into production and thus gave birth to one of the worst films ever. But I’ve put that behind me and decided to give this movie a chance. Boy was that ever a huge mistake. Obviously the film’s most negative aspect are the humans. Why the Autobots or Decepticons need help from the humans is beyond me. The robots should either be helping us or enslaving us, but they are the complete opposite of that and frankly it makes it more unbelievable. But these characters are just so awful, from Sam Witwicky (Shia LaBeouf), William Lennox (Josh Duhamel), and Seymour Simmons (John Turturro) to Dylan Gould (Patrick Dempsey) and Jerry Wang (Ken Jeong), all these characters are suffering from a lack of one thing: personality.

These characters have no personality at all. Shia is the still the same hormone driven snark remark kid who keeps yelling as he did in the last two Transformers, and he is complaining about how he still lacks a job. Maybe it’s the fact that his character hasn’t grown from the beginning of the franchise to the end of it that he is in this dilemma. This time Shia doesn’t seem to care at all and lacks any motivation to at least try to keep this movie afloat. What’s worse is that the supporting cast’s performance is just as bad if not worse than Shia’s.

A lot of the time you wonder why these characters have any value at all. Take John Malkovich. As Shia’s zany and out of touch with the world first boss, he doesn’t offer anything that is remotely connectable or comical. He just says random incoherent things that make a drunk look sober and a cocaine addict who uses used needles look like he has a clean bill of health. Ken Jeong also doesn’t bring anything new to the table. Jeong is a funny guy; there is no denying that. But I can’t help but think that he serves no purpose in the movie. Other than giving awkward stares, punning his last name, and making homophobic sexual advances to Shia in the men’s bathroom. Of course there Patrick Dempsy’s character who thinks he has a master plan to get the girl and rule the world and the fact that it is so glaringly transparent only adds to the fact that his performance was so bad. 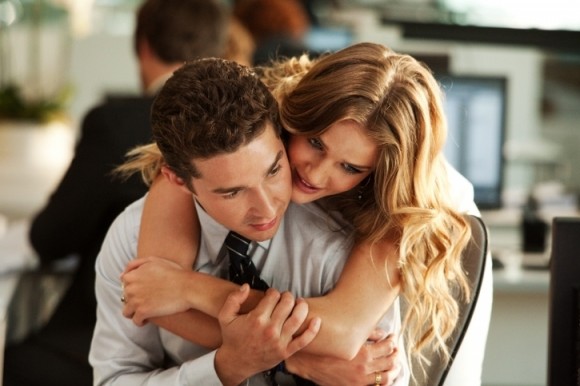 Then you have Rosie Huntington-Whitely. From the moment you start to see her, you just see her body, with the camera focusing on only the lower portion of her body and with only a shirt on. This definitely gets the guys sexually aroused and Michael Bay knows this as he uses almost every opportunity he has to sexuality exploit her and cover up whatever acting ability she has. Believe me, even if Whitely is the sexiest person on the planet, no amount of ass, boob, hip, leg, foot, or face time would cover up the fact that she cannot act. Of lot of the time it just does focus on her body parts, especially when there are slow motion explosions happening.

But characters are not the only flaws in this movie. The dialogue is also disgustingly bad. There is just minutes and minutes of corny jokes, sexual explorations, and just meandering dialogues that none of it even starts to make sense.

There seems to be a lack of editing as well. You go from one scene to the next without any fluidity or any explanation. A lot of the time these transitions are forced and you start to wonder why the last scene was of any importance. I can’t even describe just how bad the cohesiveness is in this movie because I just don’t know where to start. But it is apparent that Bay himself blew up whatever he filmed, then just glued it all back together with what was left. Over all it was just very sloppy editing and you can tell that Bay did not care about how it would start or end.

Then there are the subplots. The romantic subplot makes the Pirates of the Caribbean: On Stranger Tides romance look like an old fashioned if I knew the girl/boy next door kind of love. Honestly there is no heart of soul between Sam and his new fond love. At least with Megan Fox, there was a drive, there was motivation, there was love. Here it all feels forced. Rosie seems very submissive throughout the entire move and she seems like she just a figment of Shia’s imagination. It just does not feel real, even if it is in a Michael Bay movie.

Then you got the conspiracy subplots which are equally as offensively bad as the next. Conspiracy subplot number one: Patrick Dempesy, evil genius in the movie, gets Shia his job at John Malkovich’s company. Ken Jeong who works at the same company has been hired to lure the Autobots in the wrong direction and force them to look in circles.

These two subplots, at least I think there are two, revolve around the fact that humans discovered a Cybertronian ship during the space race and where the U.S. and Russia raced to retrieve magical pillars during the moon missions. And now you know why we never returned to the moon in Michael Bay’s world.

All of this seems to make the Autobots look stupid because it happened under their nose, and the Decepticons look even stupider because they were so close to fulfilling their mission that they were defeated by brute force. I cannot remember Optimus Prime being so stupid before or dark for that matter. I remember Prime being a strategical leader who was also very diplomatic and a pacifist who only uses violence when necessary in the animated version. Here he just has mindless destruction on his mind and uses semi-philosophical words to justify the violence he has just committed.

The epic destruction of Chicago will leave you holding your breath. Just a little game to play to see how long you can hold it until it ends. The epic third act is very convoluted and confusing. Again, how these humans think they could play a factor into saving their race from giant starships and giant robots in giant starships is beyond me. You will be baffled at the fact that you only see a few humans die and that an entire city could be laid to waste. One particular moment of tugging and pulling between a robot and a human and you will also wonder how limbs stay attached or how someone could survive while laying on a freeway. Or how an Autobot with super heat blades gets caught in cables for an hour. 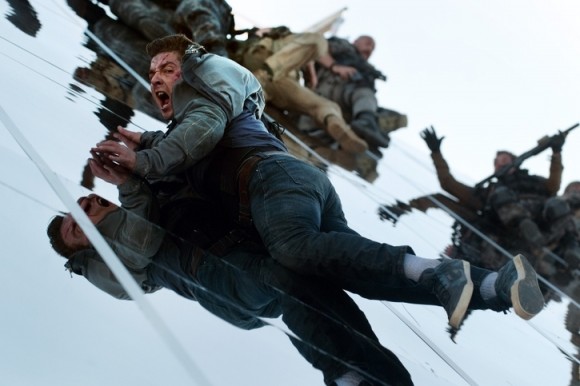 Honestly, that 3D act was the highlight of the movie. It had intense action and great 3D scenes. You cannot have great depth shot in a split second, you need to extend it for a certain period of time and that is what Michael Bay did for Dark of the Moon. The action scenes were stable and not shifty and as a result the action scenes did look better than it did in the previous two.

I could understand the fact that this is the kind of movie where you turn off your brain and just watch for the pure enjoyment, but even that would not work. I found myself staring at the floor and shifting my seating position because I was just waiting for this painstakingly long and loud movie to end. Yes the action was good. But it just did not have the heart from the first one. At least in the first Transformers you get a sense of what they are fighting for and you want the humans to win. Here, you just want to end whether humans win the war or are enslaved.

Transformers: Dark of the Moon