Movie Review: “Winnie The Pooh” Is Sweet as Honey

This Friday, The Walt Disney Company releases Winnie the Pooh in theaters. It will be the first Pooh movie in theaters since 2005. The classic children’s series debuted in 1926 as a novel by A. A. Milne, then grew into a franchise that included television shows, movies, and of course merchandising. How does this classic world hold up in modern cinema? Find out after the jump.

For the few who do not know the story of Pooh Bear, young Christopher Robin (named after the author’s son) has an active imagination. He creates the world of Hundred Acre Wood and populates it with his stuffed animals, led by honey-loving Winnie the Pooh, a “bear of very little brain”. Joining Pooh are Tigger, Rabbit, Piglet, Owl, Kanga and son Roo, and of course the depressed donkey Eeyore. The film weaves three storylines together comprising of Pooh’s search for Honey, the gang trying to find a replacement for Eeyore’s lost Tale, and Christopher Robin being kidnapped by the evil “Backson”.

These are characters that many of us have grown up with, so it’s hard to be too critical of a film that brings up so much nostalgia. Fortunately, there is not much to criticize here. Everyone is just as you remembered, especially lovable Pooh, voiced as usual by Jim Cummings (he’s been voicing the character, along with Tigger, since the late 80s). While the average film goer may be put off by the randomness of three separate storylines, they tie together pretty well at the end. In fact, I think it’s a great idea to throw in a few different stories to keep the attention of the younger crowd who can often get bored with regular movies that have a single story. It’s great to see that Disney decided not to change what we love so much about this franchise, like Pooh breaking the fourth wall with the narrator (John Cleese) and interacting with the storybook that frames the tale. These aren’t computer animated versions of the characters, they are classically drawn and mostly voiced by actors who have been with these characters for decades. Even the new voices shine, including comedian Craig Ferguson as Owl. 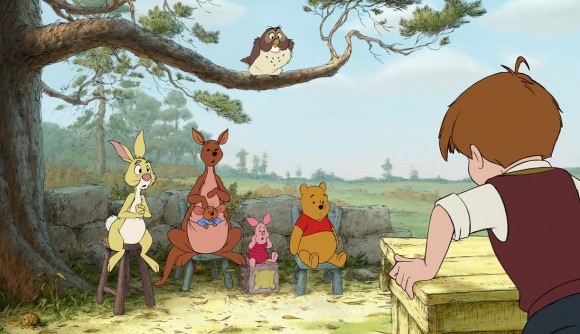 So, there has to be something wrong with this movie, right? Well, yes. First of all, the running time is just over an hour, and that includes a mediocre short at the beginning revolving around the Loch Ness Monster. I would love to see more of the Hundred Acre Wood, but maybe it’s for the best that Disney keeps you wanting more. Again, I think the kid-factor is important here. Most under 4 have trouble sitting through an entire 90 minute film, no matter how good it is, so this again this might be a smart choice by the studio (not to mention more showtimes for more money at the box office). However, the pace is very leisurely, so boredom could set in for parents and kids alike if they don’t connect to the world. Also, the few songs we get are sadly not very memorable, and Tigger feels a bit pushed to the background for some reason.

Personally, I see this all as just nitpicking. If you are looking to see a Winnie the Pooh movie that sticks with the basics, then this film will charm your pants off. It’s hard to not walk away feeling nostalgic, since the film brings you back to your childhood, especially with the ending live action shots of how Christopher Robin orchestrated the story in his bedroom. 4 STARS.