The movie buzz this week has been dominated by Warner Bros. with the release of Harry Potter and the Deathly Hallows Part 2, as well as the trailer launch of The Dark Knight Rises. Both films certainly deserve their respective attention, but Marvel is making sure that fans don’t forget that Captain America: The First Avenger is gearing up for its big release on July 22nd. Hit the jump to see the film’s latest online viral game, some gorgeous wallpapers you can download for your computer, and photos of Captain America himself ringing yesterday’s opening bell at the New York Stock Exchange.

First up, the Captain America UK site recently launched a pretty fun online game called “Wield the Shield.” In the game, you play as Cap as you attempt to take down Hydra soldiers by throwing your shield. There are multiple levels and grandiose music, which will certainly get you excited for the film.

Next, the official Captain America website underwent some noticeable updates, including the launch of a “Character Dossiers” section. Choose from a number of characters including Captain America, Bucky Barnes, the Howling Commandos, Red Skull, and more. Each dossier offers a character bio, AIM icons (is there really still a market for that?), and some pretty stellar wallpapers. 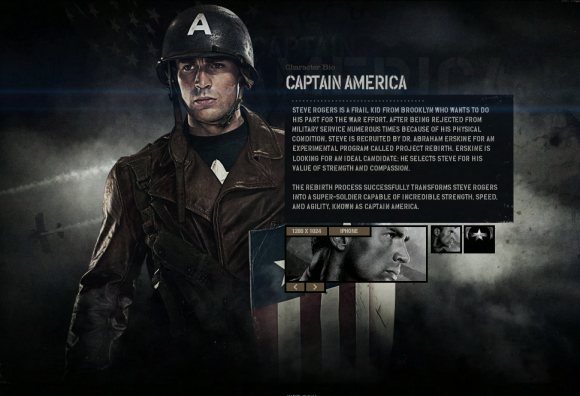 Finally, Chris Evans and several Marvel representatives were on hand at the New York Stock Exchange Monday morning to ring the opening bell for the day’s trading. Captain America toy shields were all over the place, and some major swag was being given away outside the building. It’s another unique marketing event to go along with their recent sponsorship of Major League Baseball’s 4th of July fireworks. Promoting the film with the backdrop of these very clear American cultural icons, in this case the center of the country’s financial industry, has been a great idea and will hopefully impact the film’s box office earnings.

Are these marketing strategies getting you excited for the film, or do you just have too much Harry Potter and Batman on the brain? Let us know in the comments section below. Captain America: The First Avenger is released July 22nd.